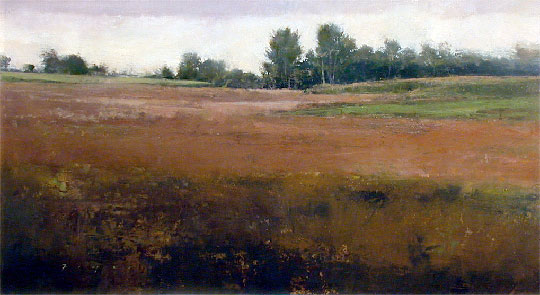 Born in Utah, raised in Illinois and California, Douglas Fryer returned to Utah to study, and went on to teach there and in other parts of the country in addition to establishing a career in illustration. His clients have included Warner Brothers, Harcourt Brace, TDK and Proctor and Gamble among others.

Fryer eventually gravitated toward gallery art, acquired his MFA in Painting and Drawing and transitioned into a career as a successful gallery artist.

His gallery work emphasizes landscape, though you can find engaging figure work as well. His landscapes have the wonderful characteristic of being simultaneously atmospheric and forthrightly declaring themselves to be paint on a surface. Bits of rough scumbling and textural strokes of color are often the essence of a given form; complexity is suggested, but turns to mist on closer inspection. His palette is often muted, but with an underlying feeling of the sensuality of the colors, as if they were whispered descriptions of the scene. Occasionally, it looks as though bright highlights have been laid on with little chunks of Rembrandt impasto.

Fryer now is a principle instructor at Brigham Young University. He doesn’t seem to have a personal site, and I haven’t turned up examples of his illustration, but his gallery work in visible online at the galleries in Arizona, New Mexico and Washington State where he is represented.

My thanks to David Malan, who studied with Fryer, for the suggestion and links. (See my post on Dave Malan.)