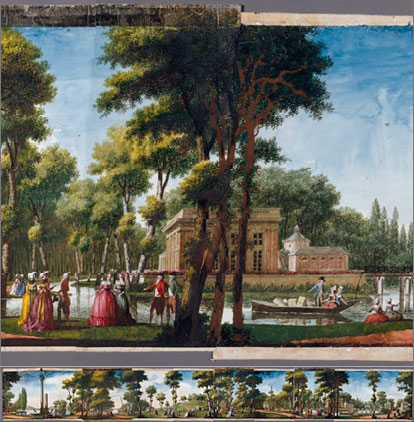 Louis Carrogis, who was known as Carmontelle, was an 18th Century French painter, architect and designer.

He was active at a time when the French court was eager to ease the tedium of their endless dalliances and interpersonal intrigues with new “entertainments”. Carmontelle supplied an ingenious one in a form that may be thought of as a precursor to cinema, a moving image, illuminated from behind.

As a result of his fascination with light and moving images and his skills as a painter and designer, Carmontelle was able to create a striking effect by painting a series of connected transparent watercolor and gouache paintings, on particularly transparent but strong paper, between 12 and 18″ high (30 – 45cm) and as long as 138 feet (42m).

These depicted scenes like luxurious parks filled with beautifully dressed gentry. They would be rolled up and then set in a mechanism that would allow them to be scrolled across the opening of a boxlike cabinet that was illuminated from behind by sunlight (presumably in an otherwise darkened room).

Carmontelle would display these moving images accompanied by musicians or his own narration. The effect must have been very TV-like, and particularly appealing when moving views of summer landscapes were displayed in the dead of Winter.

Carmontelle’s device was apparently not popular enough, however, to attract investors, so it went by the wayside after a while. Fewer than a dozen of his transparencies survive.

There is currently an exhibition at The Getty, which has one of his rouleaux transparents, (“rolled-up transparent drawings”) in its collection (image above, detail, with full scroll at bottom). The exhibit runs to June 16, 2008. The Getty has a page devoted to the exhibition that includes an animation of the scrolling image.

The site also includes some other drawings and paintings by the artist, and I list some additional resources below. There are also articles on Carmontelle, the transparencies and the Getty exhibition from the New York Times and the International Herald Tribune.

The Getty has published a book to accompany the exhibition, Carmontelle’s Landscape Transparencies: Cinema of the Enlightenment by Laurence Chatel de Brancion (more detail here).

So get out your transparent watercolors and rolls of acetate and see what amusements you can come up with to fill in for the TV writer’s strike.