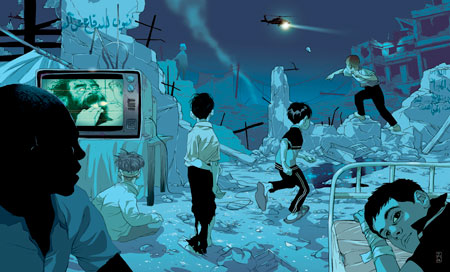 Illustrator and comics artist Tomer Hanuka was born in Israel, where he attended an art-oriented high school and developed a fascination for American comic books. After his mandatory three years of military service, he moved to New York and studied illustration at the School of Visual Arts.

He came out of school and right into illustration assignments and now has a client list that includes The New York Times, The New Yorker, Rolling Stone, Spin, MTV, Warner Brothers and Saatchi & Saatchi. He has garnered awards from The Society of Illustrators and the Society of Publication Designers.

Tomer has also pursued his love of comics. He and his twin brother Asaf Hanuka self-published Bipolar in 2000. The series was then picked up by Alternative Comics, and has been nominated for the Eisner, Ignatz and Harvey awards. Tomer Hanuka has also been a regular contributor to the Meathaus comics anthology. He has also been working for DC Comics, notably on covers for The Un-Men. There is a collection of his short comics works called The Placebo Man.

His web site opens with a horizontally scrolling selection of images, not as satisfying as a full portfolio, but I’ve found some other links for you and listed them below. There is also a blog that he shares with Asaf.

Hanuka uses the line and color methods of comic book art in his illustration, filling his line work with emotionally expressive color. His drawing approach ranges from straightforward to stylized, and he often delves into the dramatically violent. His usual process is to draw in ink and brush on paper and apply color digitally.

Tomer Hanuka is the subject of an article in the January 2008 issue of Juxtapoz.