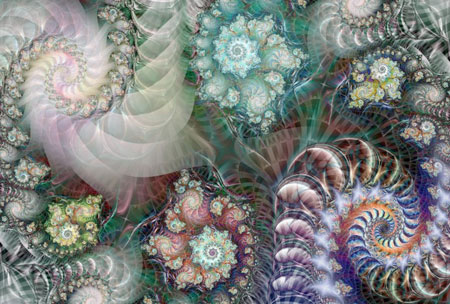 The winners of the 2007 Benoit Mandelbrot Fractal Art Contest have been posted. This is the second international contest and the entries are stunning examples of the visual beauty and intellectual fascination to be found in fractal based art.

Benoit Mandelbrot, the mathematician responsible for coining the term “fractal” and creating the deceptively simple expressions that artists (and mathematicians) use to make the startling images commonly called “fractals”, is the Honorary Chairman of this contest that bears his name.

The contest’s web site has an archive of the 49 winners, like “Crowded Street” by Yvonne Mous (above), and a more extensive page for the entries.

Fifteen of the winners have been selected to be in a physical exhibition, although the site isn’t very informative about that exhibition.

It’s also not very precise about the defined limits of how much of a given piece should be fractal-based in order to be eligible, apparently leaving that up to the discretion of the judges.

It seems as though the major portion of the work bust be fractal based, however, and the images on the site can give you a nice introduction to some of the potential in the dazzling beauty of mathematical infinity.

For more on fractal art and the science behind it, see my 2006 post about Benoit Mandelbrot.