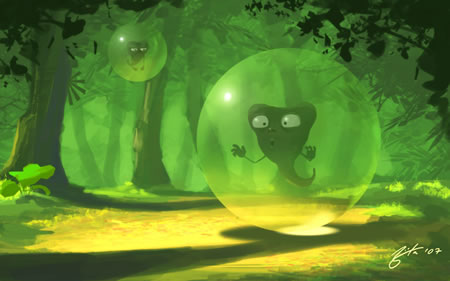 Goro Fujita was born in Japan, grew up in Germany and studied there at the German Film School, where he concentrated on 3-D character animation. He is now a freelance character animator and visual development artist.

The gallery on his site focuses mainly on his personal work. The section of finished work only contains 15 images. There are also sections for personal 3-D work and a nice sketchbook section with life drawings and quick sketches from life and imagination.

The real treasure on Fujita’s site, however, is the section of speedpaintings, meaning quickly done digital paintings. These are whimsical, imaginative and wonderfully realized in the spare, unfussed-with style inherent in speedpainting. They range across a wide variety of scenes and subjects and are sometimes hilarious (he has this thing for rabbits). In them he plays with color, composition, lighting and visual texture in ways that only free-ranging casual exploration is likely to bring out.

I have no idea how much relation any of them have to his professional work, and some are obviously playful interpretations of existing films, but a number of them are suggestive of intriguing ideas for stories.

There is a section of his short animations and a demo reel, as well as a section for tutorials, that includes tips and tricks for speedpainting, a painting screen capture and a “making of”s article about the most elaborate of the images in the Finished section, which was a Challenge entry for the CGSociety.

Fujita also has a blog, Chapter 56, in which he discusses his animation, paintings and various other topics.

One Reply to “Goro Fujita”