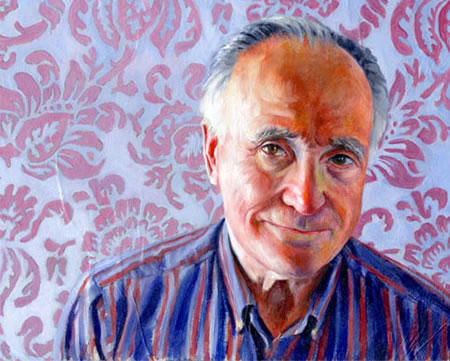 English born Canadian illustrator Robert Carter’s clients include numerous periodicals and publishers as well as commercial accounts. He has been the recipient of awards from the Society of Illustrators, The Artist’s Magazine and Communication Arts.

His illustration portfolio contains many of his highly textural, strongly designed and fascinatingly realized illustrations. What really sparks my interest, tough, are his portraits. These are strikingly rendered. often with sharply defined textures, both in the backgrounds and in the faces of his subjects.

Carter experiments and plays with color both for its emotional impact and as a design element. His colors and textures are often expressionistic, capturing an impression of the person’s presence, history or temperament as much as their physical likeness.

Sometimes he will turn down his palette to a quiet monochrome, with just accented colors to anchor your eye; at other times he will throw a wide range of color into a single face, as though it were a microcosm of the subject’s world. His portrait faces jump out at you. He puts his faces in your face.

The piece I’ve chosen here is actually one of his more sedate portrait images, but I was just struck by the balance he achieved in the intensity of his colors and the fascinating use of pattern, against which the face exerts an immediate physical presence.