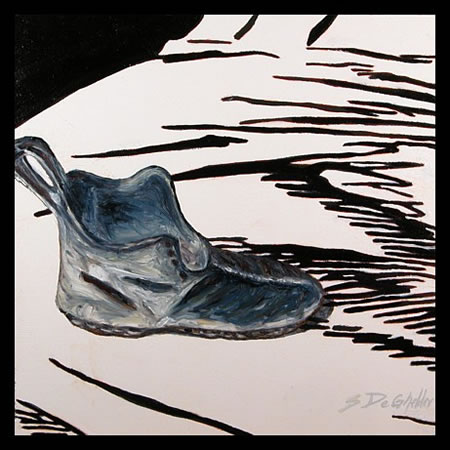 Sherry De Ghelder is a painter in the St. Louis area who has taken up the “painting a day” regimen, painting small postcard size paintings of everyday objects such as fruit, vegetables, candy, small toys, and so on.

De Ghelder’s latest series, which I came across by accident while browsing, is something else again.

She decided for the month of January to place her small subjects on her husband’s Marvel Comics super-hero cards when painting them. These cards have black and white images on them, and as a background for her small painted objects, are strikingly graphic.

In the image above, for example, the almost van Gogh-like roughness of the rendering of the toy shoe makes a wonderful contrast with the painted interpretation of the black ink lines on which it sits.

The subject of the black and white cards seems almost irrelevant. De Ghelder usually crops her composition in such a way that the black and white lines of the card image appear more as abstracted graphic elements than recognizable images, and she could probably as easily have made them up herself.

I was just struck by the wonderful juxtaposition of the stark graphic lines and the colorful painted images rendered on top of them.

The result has the power of both the black and white graphic shapes and the painterly realism and color of her subjects, giving the combination a unique feeling that is quite different from either of those approaches alone.

Personally, I think she’s on to something.