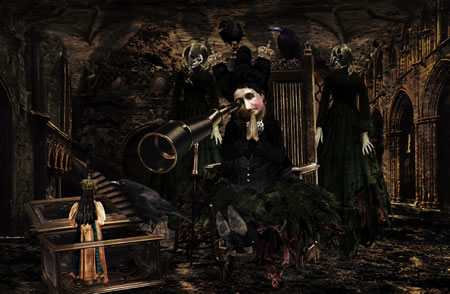 In 1934 Max Ernst published a Une Semaine de Bonté (A Week of Kindness), a Surrealist novel in collage. Ernst created his work, which I think is one of the earliest works that could be called a “graphic novel”, by painstakingly cutting out images from engraved catalog and periodical illustrations and arranging them in fascinating, sometimes jarring scenes that reel out into a dreamlike, subconscious narrative.

Modern computer technology makes the process of image based or photo-collage considerably simpler (as I can attest from my forays into X-acto knife and rubber cement collage as a teenager), but creating good, effective collage is still a challenge to the creative eye and imagination. (See my post on the remarkable photo-collages of Emily Allchurch).

Stephen Rothwell, about whom I can find little other information on the web, has created a modern collage story in a similar spirit to Ernst called Dark House Quarter. Rothwell draws on archival photographs rather then engravings, but with a similar tone of staid images from former years rendered asunder by their dream state juxtapositions.

Rothwell, like Ernst, matches his source imagery in a way that produces pictures that feel consistent and whole within themselves. Rothwell’s compostions are sometimes in sepia tones and sometimes in color that has been added to black and white images.

Also like his Surrealist predecessors, Rothwell intends for his images to provoke and disturb, but I never get the feeling he’s going for the cheap shock value present in some of the lowbrow art and so-called “Pop Surrealism” that is currently popular.

The narrative, such as it is, is more subconscious than overt. Apparently something bad has happened, or is happening, perhaps war. The images, though, are fascinating, each one a tableaux of disparate components that fit together with emotive effect.