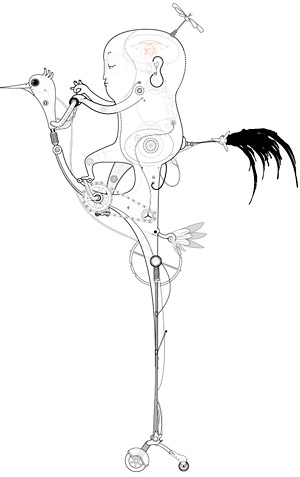 Eric Feng, a.k.a. Freic, draws images of what might be called constructs, combining mechanical elements with stylized forms from humans, birds, insects and other animals.

He draws them in elegant vector lines, usually monochromatic, but with delicate traceries of softer tones and transparencies, giving them a feeling of depth and x-ray dimensionality. The resulting drawings have a charm and informality that belies their vector origin.

His… entities have a charming whimsical appeal and are fascinating in their blending of the mechanical and natural forms. A bobbin-headed, Buddha-faced, doll-like character fishes out of the head of an elephantine mechanism apparently equipped for water and air travel. Owls have wheels. His Buddha-faced child wears an airplane. Mechanical birds sit in trees, and monkeys perch on the branches of a mechanical tree.

The galleries on his site, Fericstudio, are divided into Fevolution I, Fevoultion II and Inside Out. The later contains animated pieces as well as stills from a longer animation by that title. (There is a link to a video, but I couldn’t get it to come up in Safari or Firefox for Mac.)

In the still image galleries, many of the drawings have options to view enlargements or image variations.

One Reply to “Eric Feng”