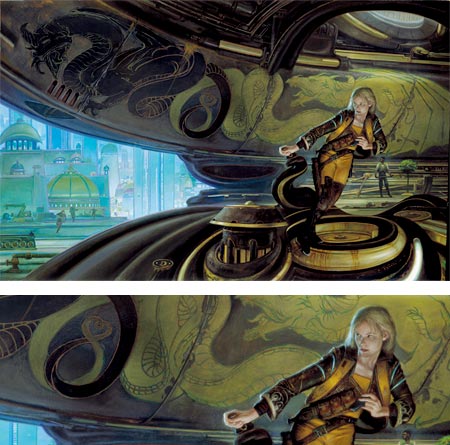 There are a number of science fiction and fantasy artists who will acknowledge their study of old master painting techniques and tell how it has influenced their work; there are few, however, whose work demonstrates that heritage as visibly as Donato Giancola.

Giancola is one of the finest science fiction and fantasy artists working in the field today, and to my mind, one of the best in the history of the genre. His extensive list of honors and awards, including multiple Chesley’s, Spectrum Gold and Silver Medals, World Fantasy Awards for Best Artist, the 2006 and 2007 Hugo Awards for Best Professional Artist, First Place in the Figurative category of the First International Art Renewal Center Open Salon and recognition in this year’s ARC event, indicates that not only do his contemporary artists and editors agree, but he is receiving notice in realist art circles at large. And well he should; Giancola is a terrific painter by any standard.

When I first wrote about Donato Giancola back in 2005, his web site was fairly well developed, but since then it has been expanded considerably, even if the appearance of the site hasn’t changed a great deal.

Giancola has added many new and larger images, and some paintings are accompanied by supplementary images of preliminary drawings, painted sketches and even works in progress on the easel.

Giancola’s excellent draftsmanship, graceful compositions and dramatic but refined use of color make his work a joy to look at. His blending and application of color in particular is exceptional, both in the overall composition and within the detailed rendering of individual subjects, particularly in in the portrayal of figures and faces. There his use of greens and multiple red hues give the sense of the varied and veinous character of caucasian skin found in Renaissance and Baroque painting.

He wears some of his other classical influences on his sleeve as well. His figures are painted with a chiaroscuro and drama inspired by Caravaggio and color and dynamism inherited from a study of Rubens. Some of his historical images reflect the influence of great illustrators like Howard Pyle and N.C. Wyeth. Most of all, though, Giancola seems enthralled with the painting mastery of Valezquez. (If you’re going to learn, learn from the best.)

Whether painting gleaming robots, intricate spaceship cockpits, towering dragons or armored warriors, Giancola’s study of old master painting gives his wildly imaginative fantasy and science fiction subjects a force and gravitas that is uncommon not only for the genre, but in contemporary illustration in general.

His site includes extensive galleries of science fiction and fantasy illustration, work done for the Magic: The Gathering collectable card game and a selection of concept art as well as a section of very nice life drawings. Unfortunately the latter two are hampered by one those annoying navigation schemes that require you to hover your mouse over little squares to view the images instead of simply clicking on them; but hey, I’ll take whatever Giancola art I can get.

In addition there is a Bio, a FAQ and a section of books, prints, card proofs and original art for sale.

The News section indicates that Giancola will be participating, along with Dan Dos Santos, Julie Bell, Boris Vallejo, Scott Fisher, Rebecca Guay and Greg Manchess, in a week-long Illustration Master Class to be held in Amherst, MA from June 16-22, 2008. (If you’re interested, act soon; attendance is limited to 90.) Special guest for the event will be Tor/Forge/Starscape Books art director extraordinaire Irene Gallo, whose informative and fascinating blog The Art Department features several mentions of Giancola.