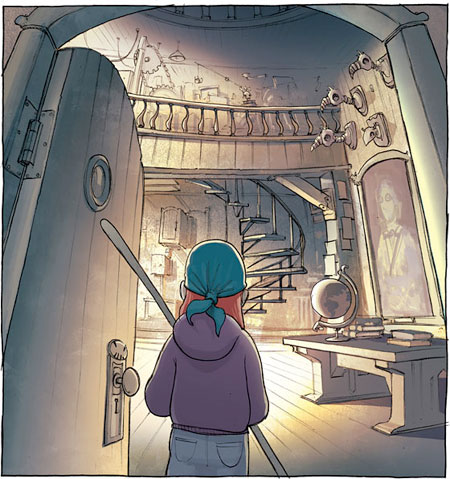 Kazu Kibuishi, who I have mentioned before, both in reference to his wonderful online comic Copper (also here), and as the primary force behind the Flight comics anthologies, has been hard at work for the last two years on a graphic novel project that has finally been released.

Amulet, Book One: The Stonekeeper is the first volume of a larger, three volume project (though it reads well as a story in itself).

The story is a fantasy adventure in which two siblings, an older sister and younger brother, must rescue their mother from deadly peril. It is something of a coming of age story in that they have the ability to take actions and effect events, but must take responsibility as well.

In it, Kibuishi combines some themes he has favored in his work on Copper and his longer pieces in Flight — the viewpoint of children, the visual textures of elements of the natural world like rocks and water, fanciful imaginative vistas, atmospheric color and eccentric flying machines.

I won’t describe it in too much detail because I enjoyed the little surprises I encountered in the story and I don’t want to deny you the same.

One of the most interesting aspects of the book, though, is the way Kibuishi has chosen to create his narrative.

You’ll find no panel-length word balloons with characters expounding on back-story or setup, no caption panels, no pages of exposition; everything is shown graphically, cinematically.

Many sequences are presented wordlessly, or almost so, relying on the flow of sequenced images to convey the narrative. This is where a comics artist’s skills as a visual storyteller are tested, and Kibuishi shows that he has studied some of the masters, probably both in comics and in film, where many of the same problems must be resolved. In both the set up and handling of the story you can see the influence of Anime masters like Hayao Miyazaki.

The drawings of the characters in Amulet are simplified, almost cartoonish; delineated with thin, single-weight outlines, and filled with areas of flat color or gentle gradations. Again, this is very like Anime, but without the slavish projection of Anime’s exaggerated stylizations to which so many young comics artists are inordinately prone.

The panel backgrounds in Amulet are often more implied that realized, with muted suggestions of detail overlayed with gradients of textured color. The exceptions are the dramatic establishing panels where the details of the background are important. There, of course, Kibuishi has a chance to show off his fertile imagination, in both fantasy and “real world” settings that are rich with texture and detail.

Throughout, his linework is controlled but retains a casual feeling; lines that accidentally cross another form or a panel border, and would normally be corrected, are left in place; nothing is ruled; even the panel borders are rough edged. Overall, the line, color and visual tone of the drawings are perfectly suited to the story.

One of the decisions about the presentation of this story that I’m not so fond of is the size of the book. The paperback edition is about 6×9″ (15x23cm), somewhat smaller than traditional comic book/graphic novel size. The book reads fine at that size, but I just prefer the larger canvas (which is why I really like the European graphic album format which is over twice the size of this volume).

The book is published by Scholastic, and this is the same format as their color editions of Jeff Smith’s Bone. In both cases it may be a compromise to keep the price of a 200 page color graphic novel down to under $10; which, for work of this caliber, is a tremendous bargain.

Kibuishi has created a page devoted to Amulet, in which he collects many of the posts from his Bolt City blog that have chronicled his work on the book; although, like many comics authors and artists, he has been so close to the project that he has neglected to include introductory information for newcomers.

As a better introduction, there is a 12 page excerpt from the beginning of the story (non-spoiler) on the New York magazine web site (who now has a terrific regular practice of excerpting recent graphic novels on their Comics Page). There is also an interview with Kibuishi about the project on Newsarama.

2 Replies to “Amulet, Book One: The Stonekeeper”