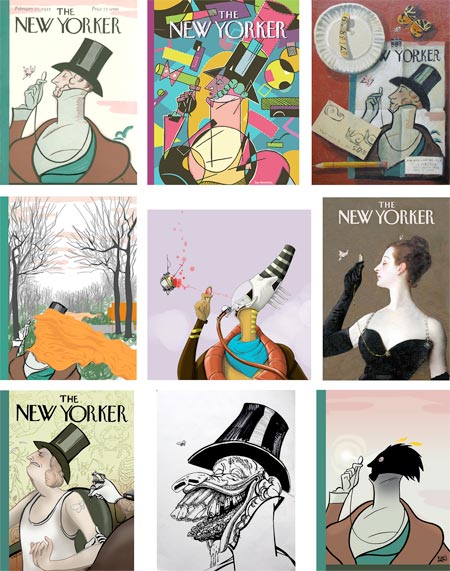 Had I been on the ball, I would have told you about this earlier, as well as probably entering myself for the fun of it.

Every year The New Yorker holds a Eustace Tilley Contest, in which participants get to draw (or paint) their interpretation of the venerable magazine’s upper-crusty top-hatted and monocled iconic character.

The original Eustace Tilley was drawn by cartoonist Rea Irvin for the cover of the magazine’s first issue (above, top left) in 1925, and has reprised his appearance every year since on the anniversary issue. There is a history of Eustace Tilly here.

The New Yorker has a slide show of 17 past Eustace Tilleys (including Robert Crumb, Chris Ware, Charles Burns and Art Spiegelman).

The contest is open to anyone. This year’s contest just ended on January 24th. (I’ll try to tell you ahead of time next year.) The winners will be announced on February 4th.

Of more interest, however, is the Flickr gallery (thumbnails here) of 160 of this years entries, with all of their varied and imaginative takes on the character, his top hat, monocle, profile, stiff-necked pose and presumed disdainful butterfly fascination.

[Link via Kottke via Waxy]

4 Replies to “The Many Faces of Eustace Tilley”