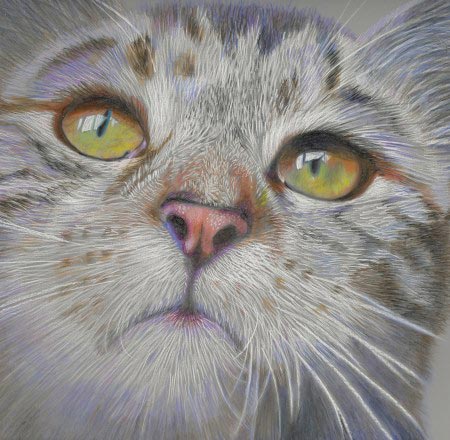 Johnnie Scoutten is a designer and creative director who also paints and draws in a variety of media.

The image shown here, for example, is one of a series of similar close-ups of cat faces done in pastel and, in particular, in colored pencil on drafting film; a process she notes on her blog as particularly delightful.

I was just struck by the wonderful texture of the animals’ fur and the liquidly dimensional rendering of the cat eyes in the entire series. I was also amused by the close-up compositions; notably in that they are the kind of crops most often associated with portraits of people, and tend to emphasize the anthropomorphic character of the cats. The one above, in particular, looks like it could be a portrait of the CEO from the International Mousers Guild Annual Report.

Scoutten has a work in progress version of this image on her blog in which you can see the colored pencil lines going down over the gray background on the drafting film.

In addition to the blog, Scoutten has a web site with galleries of her work in pastel, oil, and acrylic; with subject matter ranging from still life, to florals, to landscape to renderings of vehicles. Some are quite painterly, others smoothly blended; but there always seems to be attention to achieving a textural quality that works to best advantage in matching the subject matter with the medium and approach.