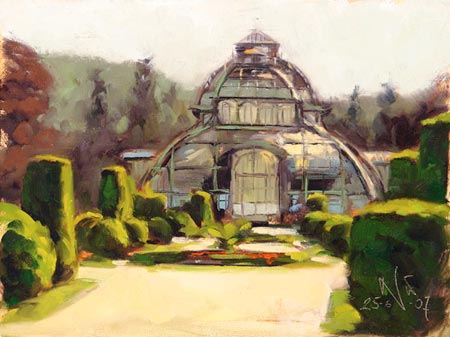 Stefan Nuetzel (or Nützel) is an German painter living and working working in Vienna (Wien), Austria.

The galleries on his web site feature his paintings of a variety of subjects, including portraits, figures, interiors and landscapes.

The interiors are a short series of art museum views, but there is also a fascinating series of interiors from the Museum of Natural History in Vienna with their mounted animals and glass cases full of biological arcana, and a nicely bizarre series of views of the Baroque crypt under the Church of St. Michael, looking rather spooky in light of small spotlights.

There is an extensive gallery of figure painting, apparently quickly done, perhaps in a class setting, and a number of portraits. The portraits are supplemented by a separate series called “Konterfei”, featuring a series of quickly realized portraits of friends and family, mostly done in three hour sessions.

There is also a rather odd series of illustration-like paintings inspired by a book by Michel Butor called Portrait of the Artist as a Young Ape.

Nuetzel also has a blog in which he posts new paintings, works in progress, photos of shows and information about the workshops he teaches (also featured on the site). His blog posts are both in English and German (or Austrian German, I’m unable to differentiate between them).

The works I found most interesting from his online galleries were in his two sections of Plein Air paintings (2006 and 2007). These not only have that wonderful immediacy and freshness inherent in paintings quickly done on location, but are of a variety of interesting subjects, often urban scenes, parks and other locations that display some fascinating views from in and around the beautiful city of Vienna.

I particularly enjoy his paintings of the Art Nouveau steel and glass pavilions in the botanical gardens.