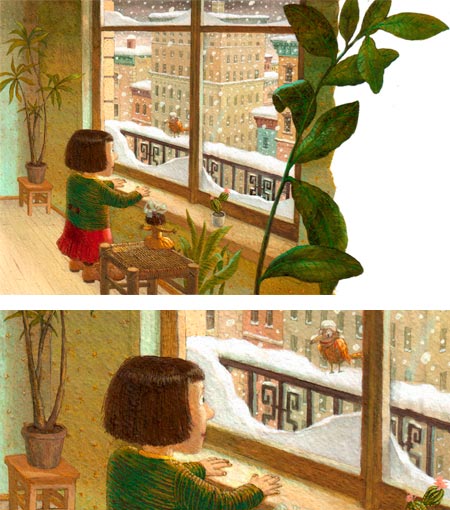 There has been some debate among artists and illustrators (some of it on the comments pages of certain posts here on lines and colors) about the wisdom of placing relatively large, non-watermarked images on the web, where they can ostensibly be “stolen” and used for some nefarious purpose.

Those who have read my posts on how to display your art on the web, and my rant on how not to display your art on the web, will know that I come down firmly on the side that holds that displaying your work to best advantage far outweighs the disadvantages of potentially having it “borrowed” (the aversion to which I think is often more a case of indignant territorial response than a practical concern).

As a case in point, if I hadn’t seen Boris Kulikov’s wonderful children’s book illustrations either in print or in relatively large digital versions, I wouldn’t have become an instant fan. As intriguing as his conceptually clever and wonderfully drawn illustrations may be at a smaller size, it’s the texture and detail revealed by higher-resolution images that really grabbed my attention.

Kulikov describes his work as “mixed media” which appears to be mainly pencil, pen, watercolor and gouache. The children’s book illustrations are mainly watercolor, but Kulikov works on a textured watercolor paper rather than smooth illustration board, and the reproductions show that texture in a way that makes his washes and blocks of color display a wonderful textural quality, and carries some of the feeling of “this image is made of paint” that is present in “painterly” oils.

Kulikov combines this with an imaginative and colorful approach to his subjects, sometimes dreamlike scenes, nicely stylized characters and a terrific knack for slightly offbeat compositions, to create a style that captures your eye.

He also does beautiful pen and ink illustrations, notably for the Giants of Science series by Kathleen Krull.

His site is a bit awkward to navigate, but the children’s book illustrations are divided into color and black and white, as are the “other” (editorial) illustrations. Though the latter are also imaginative, conceptually clever and nicely realized, they are drawn and painted with a different feeling and approach and don’t wow me like his children’s book work.

In either case, when looking through his online galleries, be sure to click on the individual images for the higher res versions, and you’ll see why I think it was very wise of him to make those images available. In the meanwhile, I’ve made a note to look for some of the books he’s illustrated the next time I’m at the bookstore.