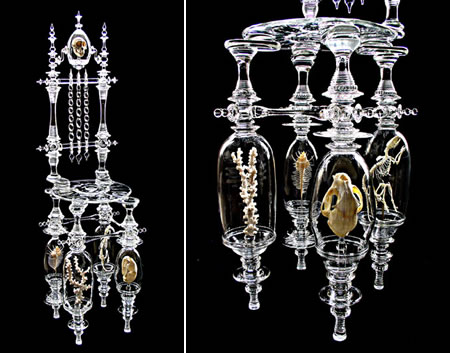 Andy Paiko is a glass artist who creates glass sculpture as well as sculptural vesselware and traditional vesselware.

I suppose “gothic” might be a term applied to his fascinating constructions of ornately crafted glass that often incorporate the skulls of small animals, spine-like constructions and other natural elements in ways that are slightly creepy but also fascinating in a pre-20th Century bizarre-object-in-a-bell-jar kind of way.

Paiko does, in fact, create bell jars, among his other nouveau arcana, such as an absinthe fountain and the “Lube Rack“, meant to “enhance one’s friction-free environment” with art glass “spice jars” full of everything from motor oil to lard to burbon.

His glass sculptures are usually constructions that are a sculptural variation on some object that would normally not be composed of glass, like a seismograph, a hammer and nails, a balance, a picture frame, or a spinning wheel; and occasionally are odd takes on objects that are normally made of glass, like a five foot long syringe or his hourglass filled with black sand.

When viewing Paiko’s online galleries be sure to be aware of the options near the top, either text links of small squares, that allow you to click through multiple views of the object, or multiple objects in a series.

The piece shown here, simply titled “The Glass Chair“, is a collaboration with Douglas Little and is owned by Conde Nast Publications, which, inexplicably, didn’t use it in the final spread of the “Gothic Splendor” article in House and Garden for which it was photographed. The piece is chair-size, about 50″ (126cm) tall, and is composed of about 250 separate parts, including a piece of octopus coral, a murex spiny trumpet shell, the skeleton of a rat and the skulls of a rhesus monkey and a mountain lion. Just the thing for that empty alcove in the hall.