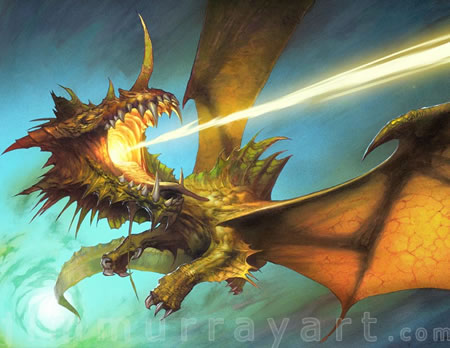 I usually don’t write about artists whose online work is watermarked, as it often makes the display of the work pointless, but if the watermarking doesn’t deface the art too dramatically, and the artist is interesting enough, I’ll make exceptions.

I’ve seen a lot of imaginative and well-painted illustration over time for the collectable card game Magic: The Gathering from Wizards of the Coast, but Jim Murray’s pieces for the series stand out for their overt sense of playfulness and fun.

In addition to his more direct pieces, in which his paint handling and drawing skill are evident, are lots of images of gnarly, grotesque monsters, weirdling characters, bizarre environments and a parade of off-the-wall elves, wizards, warriors and animals painted with a sense of humor, outrageously over-the-top color, hugely fun, cartoon-like exaggerations of form, and a fevered imagination.

Murray obviously has a sharp ability to draw and paint realistically when inclined, but he prefers to let himself go wild, pulling his human and animal forms into taffy-like stretches, exaggerating motion, and rendering fanged and clawed beasties with a verve that makes them seem ready to jump out at you.

Murray generally works in acrylic on illustration board or watercolor paper. His online galleries include the aforementioned illustrations for Magic; covers for U.K comics like Judge Dredd and American Comics like Batman, where his exaggerated characters and colors at times put me in mind of Simon Bisley’s over-the-top comics work; art for gaming companies and a sampling of an independent comics project, co-created with Robbie Morrison.

There are also 1024×768 wallpapers of some of his pieces, links and a brief bio.

Murray lives and works in Montreal, where he apparently has lots of fun working on his projects.

[Link via The Art Department]

One Reply to “Jim Murray”