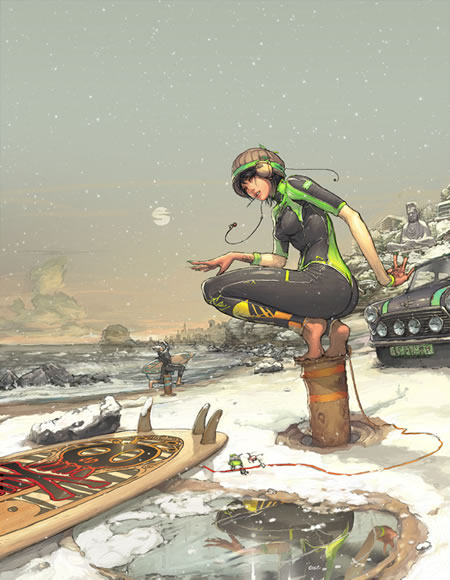 Gez Fry is a half British, half Japanese illustrator who has lived in France and England and is currently based in Tokyo.

I think his multi-cultural background shows up nicely in his work, which is an interesting synthesis of influences from illustration, comics and animation from several continents.

Much of his work shows the influence of anime, and anime related concept design (hard to avoid when you’re living in Tokyo). This shows particularly his handling of color. You’ll notice, for example, the use of the “halo” effect, common to anime, where the suggestion of strong light from behind an object is given by softening the edge with a haze of lighter tone or even white, almost bleaching out objects in places. You will also see mecha-like influences in his designs for robots and mechanical devices.

Many of these images, however, have a feeling of three-dimensional solidity and realism that is more European in character, and he has a realist approach to the rendering of clothing and the modeling of faces that is uncharacteristic of anime and associated illustration styles, and gives his style a unique quality.

Some of his drawings, which are particularly appealing in their use of line, are reminiscent of European and American illustrators/comics artists like Jean Giraud or Geoff Darrow. Gez is, in fact, working on a graphic story called Roses & Skulls.

Some of his clients as an illustrator include Adidas, ILM, Nike, Evisu, Adobe, Nintendo, Harper Collins, McGraw-Hill, Marvel and Wizards of the Coast.

I’ve found a few interviews on the web, though very little in the way of additional artwork. The article on the CG Society is notable for having large images of his preliminary sketches, including a sketch for the image above, Winter.

Inerestingly, Gez’s mother is also an artist with a unique style; you can see her web site at mayko.net.

Unfortunately, I found the gallery of work on Gez’s site frustrating on three levels: it uses one of those tedious pop-up-and-close display paradigms, in addition to which you have to horizontally scroll the thumbnails in a tiny frame; and, most frustrating of all, it’s much too short. I would like to see a lot more of Gez’s terrific work.