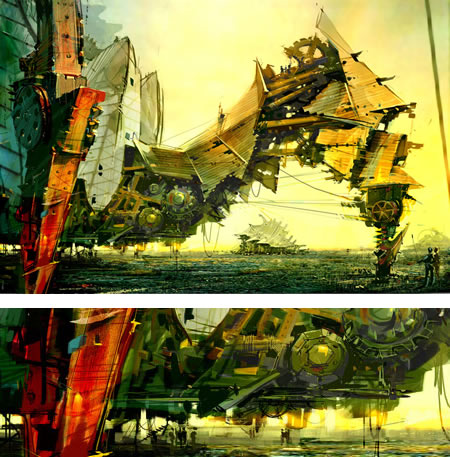 Daniel Dociu is an art director, illustrator and concept artist working in the gaming industry. He was born and studied in Cluj, Romania, moved to Athens and then the U.S., and now lives in Seattle, Washington.

He has worked for companies like Squaresoft, Zipper Interactive and Electronic Arts and is now Art Director at ArenaNet. His credits include Guildwars: Prophecies, Guildwars: Factions, SSX3, James Bond 007: Everything or Nothing, SOCOM: US Navy Seals, MechWarrior III, and many others.

Dociu’s images often have a sharp, angular feeling to them, which gives them a sense of energy and impending motion. He works often in what look like science fiction themes, and with environments that convey a sense of monumental scale. His color palette frequently contrasts rust colored oranges with electric blues or icy greens for dramatic effect.

Fortunately, his online galleries feature pop-up images of a decent size because much of what I find most appealing in his work reveals itself in the details, where he is able to simultaneously employ loose, gestural rendering and a remarkable suggestion of detail.

Unfortunately, both his site and a gallery on the Komotion site suffer from less than ideal interface designs. In the former, the thumbnails are too small to judge the image by, and the pop up window makes you wait while it calculates the image size with JavaScript and resizes itself. I actually find the other gallery a bit easier to browse, though I almost missed it at first. In a particularly bad piece of interface design, what appears to be a heading image for a credits page is actually a large button that calls up a pop-up window with a gallery of his work.

Dociu works digitally and there is a nice article about him on the CG Society.

His splintered geometry and whorls of angular forms give his concept paintings an unusual and fascinating feeling of continuity, while still ranging across a wide expanse of imaginative terrain.