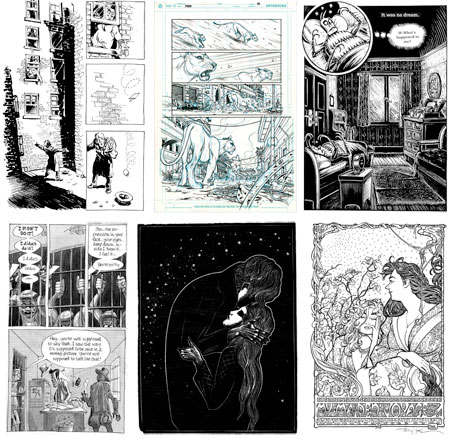 If you tell a story of a certain length with words, it is called a novel; and, bad or good, is considered representative of an art form. Drawings are likewise considered representative of an art form, whether they are good examples or not. Put words and drawings together, however, and they somehow sink through the clouds, disappear from the art form firmament and descend ignominiously to earth (or below) with a resounding thud.

Getting the art establishment in the U.S. to accept comics as the unique art form that they represent has been a little like getting Israelis and Palestinians (or worse, Republicans and Democrats) to admit that the other may occasionally have a valid point of view.

This stonewall of cultural bias seems to be largely localized to the United States, perhaps out of insecurity in our ability to lay claim to having culture in any form. Museums large and small in Europe will mount major shows of comics artists and cartoonists, recognizing them as a valued part of the cultural whole.

I’m always heartened when museum exhibits of comics and cartoons are mounted, as it represents progress, however small, in the direction of improving that awareness.

The Norman Rockwell Museum, which should be very aware of cultural bias in the visual arts in the form of the “illustration is not art” bias that accompanies the “comics are trash” bias, has taken a good step toward promoting awareness of the place of comics in our cultural treasure chest with their current exhibit, LitGraphic: The World of the Graphic Novel.

The Rockwell museum has a somewhat skimpy preview on their site that I don’t think highlights the major figures in the exhibition well enough.

The exhibition is currently on view and extends to May 26, 2008.

I haven’t seen it, and I’m not certain if my schedule will let me get there, so I’ll refer you to a first person account from James Gurney, who also lists additional links and resources relevant to the exhibition, including links to some mini-documentaries producer Jeremy Clowe has posted on YouTube.

In addition, TFAOI has an article and a list of labels from the exhibition.

Link: LitGraphic: The World of the Graphic Novel
NRM Preview
Article by James Gurney
TFAOI article and list of labels

5 Replies to “LitGraphic: The World of the Graphic Novel”