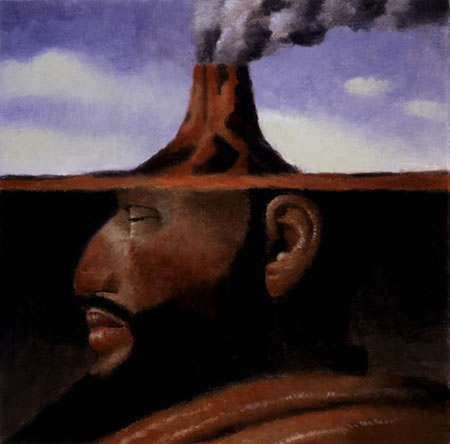 Brad Holland has been a major figure in contemporary American illustration for as long as I can remember, and I’ve wanted to do a post about him for some time, but I’ve been put off by his web site, in which the images are few and inexplicably small.

I just discovered, however, that Holland now has a space on illoz that is many times better than his own web site and finally gives an adequate view of his work.

Holland has a long list of prestigious clients including The New York Times, The Wall Street Journal, Vanity Fair and many others.

I remember being impressed early on with his pen and ink drawings, in which he somehow made ink textures that felt like charcoal and pulled light out of darkness.

His ink drawings can be at times sophisticated and complex and at other times have a rough cartoony feeling reminiscent of the drawings of B. Kliban.

His color pieces have a remarkable feeling in which color and texture seem to be inseparable, as though he worked in color/texture as a sensibility rather then one or the other at any given moment.

His editorial illustrations can be brain-tinglingly clever in their concept and execution, often making a complete statement in themselves in addition to illustrating the written piece.

New York Art World hosts a page of quotes from Holland on art and related subjects that, agree or disagree, are worth a listen.

I particularly like his quote on “That’s Not Art, That’s Illustration”: