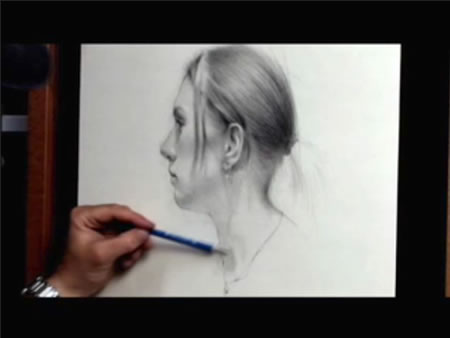 ArtDemonstrations.com is a blog in which the author has collected and shares links to various art demonstrations and tutorials he has come across on the web.

Some of them are more useful than others and they take several forms, from a few steps in a painting process shown as photos, to longer step-by step breakdowns, to time-lapse videos of the creation of drawings or paintings (like the portrait drawing by Barrett Bailey shown above), to full half hour or more videos of painting demonstrations.

At first I thought that the blog might be from someone associated with SmartFlix, an instructional video rental service that features a number of art instruction DVDs, because of the ubiquitous banner. There is also a list of text links under his Google ads that look like a blogroll, but are actually links (presumably paid links) to items in the SmartFlix store. These are videos that might be of interest, but the listings feature no actual online demos or articles.

Apparently, though, SmartFlix is just a sponsor the author encountered after doing a short post on them. (They’ve contacted me as well, but I haven’t had a chance to check into the service yet. I’ll try to rent a video or two and give you a report in the near future.)

Some of the ArtDemonstrations.com posts are links to short promos for artists’ commercial video releases, including short excerpts from a new instructional painting video, The Portrait Sketch, by Jeremy Lipking, as well as other video clips of him.

In addition to Jeremy Lipking, the blog points to demos by other artists that I’ve mentioned on lines and colors, including Tony Ryder, Duane Keiser, and a couple by William Whitaker (from the blog’s listings for November, 2005)

Other posts mention books and web archives of books, as well as tidbits like old film of Picasso at work and a PDF of an article on Sargent’s painting methods (PDF link 28k) posted by Craig Mullins.

In addition to Mullins there are a few mentions of concept artists, though that’s one of the largest areas of available tutorials on the web, particularly in the portals like CG Society and ConceptArt.org. Still, most people with a particular interest in concept art are aware of those sources and I think ArtDemonstrations.com is better aimed at the broader art community.

Unfortunately, the author, who I can find referenced only as “Jeff” (and is apparently an artist himself and has contributed one or two of his own demos), doesn’t seem to post often; and has not yet included a number of readily available painting demos I’ve come across on YouTube and other places.

The idea of trying to collect a central reference for available art tutorials on the web is a terrific one, and I would love to see it pursued more aggressively; but instead of complaining, I should be thanking Jeff for sharing what he has.