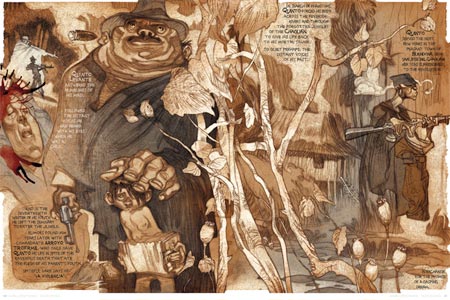 Daniel López Muñoz is a Spanish born concept and visual development artist for the film industry now living in California. He worked for some time for Blue Sky Studios and now works for Pixar. His credits include Ice Age: The Meltdown and Robots, as well as a series of 3-2-1 Penguins titles.

Muñoz has been blogging since July of 2006, but his schedule has evidently kept him from posting often. The blog’s contents, while not extensive, do hold enough treats to make it worthwhile; including concept art from various professional projects, as well as some personal pieces.

The blog includes a number of concept designs from the movie Robots, which show that the best thing about that movie was, in fact, the concept art. These make me marvel, as I often do, at the way studios so often take terrific work on the part of their teams and squander it on tired clichés instead of good stories, evidently afraid to do something that doesn’t follow an existing formula.

The list of participating artists includes a number of artists I’ve featured previously on lines and colors: Daisuke Tsutsumi, Jake Parker, Sang Jun Lee and Peter de Séve. For the complete list and more information, see the Out of Picture blog, which includes a few tastes of work from Out of Picture 2.

Muñoz is also a participant in the SketchTravel project. (See my post from last year about SketchTravel.)

One Reply to “Daniel López Muñoz”