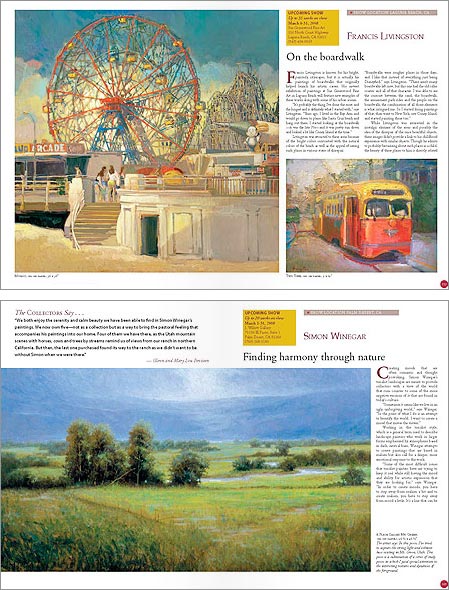 American Art Collector is a national art magazine that you should be able to find at larger magazine shops and bookstores in most parts of the U.S.

Ostensibly for art collectors, it’s of interest to artists as well. Unlike many magazines that cover the “art scene”, American Art Collector, focuses on contemporary representational art.

Each issue features about a dozen articles on individual artists who have gallery shows running concurrently with the release dates of the issue, and another 6 or 8 group shows. (The intention, of course, is to encourage the galleries to advertise in the issue showcasing their artists and shows.)

There are also articles on galleries, usually an in-depth one and several others showcased in an article on a particular geographic region of the U.S. (The current issue, March 2008, focuses on some galleries in Washington, D.C.)

There are also articles on the display of art in galleries, notes on exhibitions and the art market in the U.S. in general (again with a focus on representational art).

There are also lots of ads for artists, galleries and individual and group shows, that are entertaining and instructive in themselves, both in terms of seeing what is selling these days, an in terms of how galleries are representing themselves and their artists in print ads. There are also lots of URLs for galleries in their ads that you can check out, and a list of artists and advertisers in the back of the magazine. (It’s interesting to note an ad for the Daily Paintworks collaborative site, most of whose members I’ve featured on lines and colors.)

One of the things I think is most useful about the magazine is the presence of price guides in the articles on individual artists and the artists participating in group shows. Often these indicate the price for a range of sizes for the artists’ works, and a comparison with the prices they were commanding for similar work a year or several years earlier.

This is very informative in terms of getting a feeling for how particular artists are selling, comparing their styles, regional differences and the change over time as an artist’s reputation and following grows.

There are also interviews with both artists and gallery owners about pricing, selection and presentation of works, and a lot of other topics of concern to artists who are selling through galleries. There is also some discussion of painting techniques and approaches, but this is not at all a “how to” magazine.

The magazine has a web site that gives you some idea of the content, though it’s not as clear as it might be. There is a sort of preview of some of the current issues pages in a little interactive feature on the home page. (Unfortunately, it’s in one of those hideously cutsie “page-turning” Flash dealybobs that people just seem to love, likely for the same reason that they love paintings of dogs playing poker.)

If you go to the page for “Issues“, you’ll see a table of contents of the current issue, from which you could do a little Googling to check out some the artists mentioned; though it would certainly be easier to simply browse the issue at a newsstand if you have that option. You can also order copies of past issues. The newsstand price is $6.95 U.S.

All in all, I think this is worth a look for anyone interested in the realist and representational art market in the U.S., whether you are a patron, gallery owner or artist. (I’m sure there must be comparable publications in Europe and other parts of the world, but we seldom see them here in the U.S.)