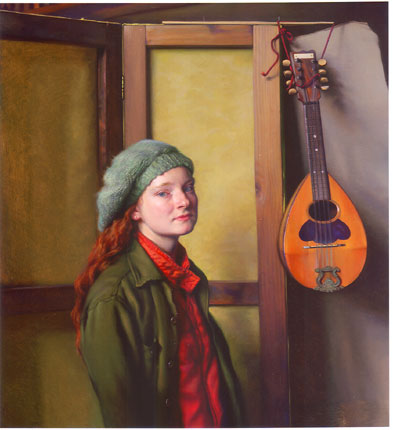 It’s always seemed to me that portraiture is a particularly demanding type of painting, at least the kind of portraiture in which the artist is commissioned to create the portrait, as opposed to an artist who paints someone simply because they find them an interesting subject.

Not only do you have the exacting demands of producing a likeness, which requires very careful observation and, depending on style, faithful reproduction of that likeness with careful draftsmanship and rendering; a commissioned portrait requires that the client, whether the individual themselves or someone related, be pleased with the result, which is an issue faced more often by illustrators than gallery artists.

If someone doesn’t like your landscape, they pass by in the gallery and you can sell it to someone else. A commissioned portrait has a very limited market.

Some artists thrive on the practice, though, and history’s great painters have included numerous portrait painters.

The modern practice doesn’t get as much attention as some other types of painting, but there are portraits artists who are at the top of the game and get a great deal of respect from other artists as well as their from their patrons.

Nelson Shanks is one of the latter. With a background in academic art training that he “pieced together” from various teachers and sources, both here and in Europe, Shanks has established himself not only as one one of the country’s premiere portrait painters, but also as one of the major proponents of classical realism.

Shanks, along with his wife Leona Shanks, is the founder of Studio Incamminati, an atelier style teaching program here in Philadelphia, which focuses on the principles of classical realism.

Shanks’ commissioned portraits include such notable figures as former presidents Bill Clinton and Ronald Regan, Pope John Paul II, Margaret Thatcher, Princess Diana, King Gustav and Queen Silvia of Sweden, Queen Julianna of the Netherlands, Luciano Pavarotti and numerous CEOs and chairmen of boards, including those of the Museum of Modern Art, the Metropolitan Museum of Art and the New York Times.

His web site has a few of these portraits, as well as figure paintings and a few other subjects, but the images are frustratingly small. There is a selection of larger images on the Art Renewal Center, which also has a separate article on him as a “modern master”, Nelson Shanks, Humanist Realist.

Personally, I’m more interested in his figure painting, which is superb, and his portraits of non-famous individuals, in which you can more clearly see the painter as a painter, rather than as a painter in that particular role of portrait painter of notable figures. It is here, I think, and in those rare excursion into landscape, and particularly interior scenes, where Shanks shines.