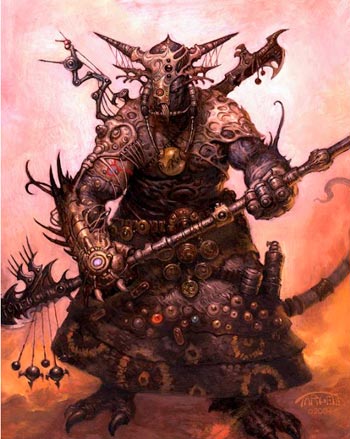 How about some nice monsters and warriors for a Friday diversion?

Targete is an illustrator, concept artist and art director for the publishing and gaming industries. While attending the School of Visual Art in New York on a full scholarship, Targete began illustrating book covers for Avon Books. Since then he has expanded his publishing client list to include Ace/Berkeley, Bantam, Warner Books, Eos and Tor. He won the A.S.F.A. Chesley award (named for pioneering space artist Chesley Bonestell) in 2000 for best paperback book cover.

His work has appeared in the Spectrum collections of contemporary fantastic art and a collection of his work, Illumina: the Art of JP Targete, was published by Paper Tiger in 2003.

In recent years Targete has been focusing on concept art for gaming companies and worked for NCSoft for a time, contributing to upcoming games like Tabula Rasa and Aion.

Targete is currently freelancing and, in addition to his other projects, is working on a graphic novel. He is also the instructor for a three part DVD from the Gnomon Workshop, Imaginative Illustration with J.P. Targete.

Targete works in a variety of media, oil, watercolor, acrylic and digital. His online gallery is divided into traditional paintings, digital paintings, two sections or concept art and a section of sketches.