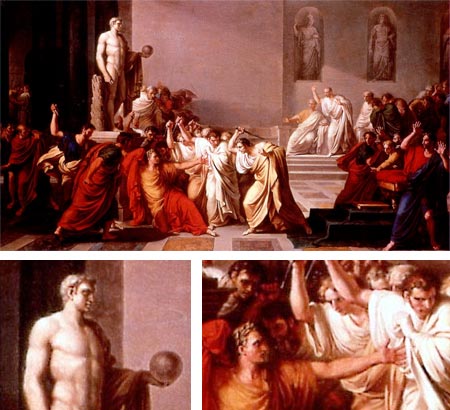 Today is the “Ides of March” or March 15th, the anniversary of the date in 44BC when a group of Roman senators assassinated Julius Caesar; whose lust for power had prompted him to declare himself absolute ruler for life (i.e. dictator), and thus threatened the senators’ power (more important, of course, than the welfare of the Roman citizenry, but it threatened that as well).

Personally, I think the Ides of March should be a worldwide holiday, in which power hungry leaders everywhere should be reminded to watch their step, perhaps with the circulation of images like Vincenzo Camuccini’s Death of Julius Caesar.

Camuccini was an Italian painter active in the late 18th and early 19th Centuries, and was considered the foremost Italian academic painter of his time. He was a neoclassicist, like his French contemporary David, painting histories, such as the aforementioned demise of ol’ Julius, and portraits of eminent members of society.

Camuccini spent the early part of his career copying the masters, particularly Raphael. His own style, while considered more refined than original, eventually gained him popularity and made him rich enough to allow him to collect a large number of works by other artists, including Raphael’s Madonna of the Pinks.

Camuccini’s Death of Julius Caesar is staged as a tableau rather than an intimate drama, but his portrayal of Caesar is reliably accurate, as it is based on an existing bust of Caesar from Caesar’s time, one of the first examples we have of direct realistic portrait sculpture of a known individual.

The death scene and Camuccini’s self-portrait are about the only paintings of his you’ll see widely reproduced, but his death scene is often used to illustrate the event, and/or mention of it in Shakespeare’s play.

Where most portraits of leaders are monuments to power, the Death of Julius Caesar is a monument to the limits and end of overreaching power, a far nobler subject in my estimation. So to all of the world’s leaders (and so-called leaders), I wish you a careful, thoughtful and warily observant Ides of March!