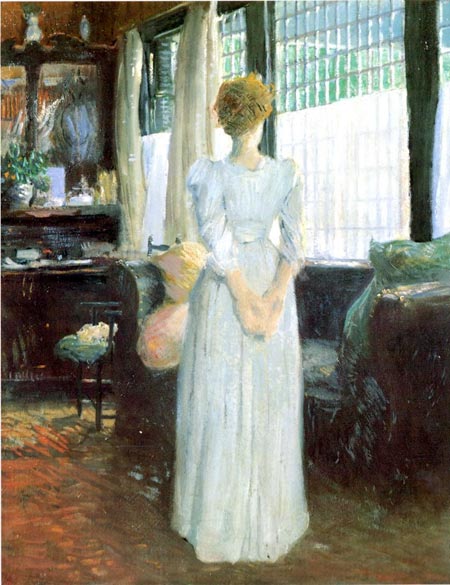 Julian Alden Weir, more commonly called J. Alden Weir, was one of the wonderfully diverse group of artists that get lumped together under the catch-all heading of “American Impressionists”.

Weir was a member of The Ten American Painters, a loosely tied group of painters in New York and Boston who broke away from the Society of American Artists, which was itself a splinter group from the National Academy of Design. His compatriots in the Ten included Childe Hassam, Robert Reid, Willard Metcalf, Frank Benson, Edmund Tarbell, Thomas Wilmer Dewing, and eventually, William Merrit Chase.

Most important among them for Weir was John Henry Twatchman, with whom Weir formed a long lasting friendship. The two artists painted together, often exhibited together, and were both teachers at the Art Students League in New York. Weir also taught at, and was a member of, the Cos Cob Art Colony, an artists community that sprang up around Twatchman’s home in Greenwich, CT, along with Hassam, Theodore Robinson and Robert Reid.

Members of the Cos Cob Colony were involved with the staging of the 1913 Armory Show, famous now for introducing European modernist art to America; over which Weir resigned from his presidency of the Association of Painters and Sculptors.

As a student, Weir trained at the National Academy of Design, and then in Paris at the École des Beaux-Arts, where he studied with Jean-Léon Gérôme and was friends with Jules Bastien-Lepage, who became something of a mentor.

When he returned form Europe Weir intended to make his living painting portraits, but was unsuccessful in obtaining portrait commissions for some time, so many of his portrait works from the time are of family and friends.

Weir’s style and approach changed dramatically over the course of his career, from traditional landscapes that have a feeling of Corot and Courbet and portraits influenced by Manet, to later works in which he came to adopt some of the stylistic characteristics of French Impressionism (which he at first despised), and a continuing influence from his fondness for Japanese prints.

He was also influenced by Twatchman’s tonalist aproach, possibly also the result of meeting Whistler in London before returning to the U.S. after his time in France. There was also the tonalist influence of his friendship with Albert Pinkham Ryder. Weir’s older brother, John Ferguson Weir, who I can find little info on, was also a painter, working somewhat in the tradition of the Barbizon School.

J. Alden Weir’s intimate interior scenes often put me in mind of those of Edmund Tarbell and Childe Hassam, with their muted light and tactile feeling for wood and cloth.

In his later career, Weir didn’t share his friends’ enthusiasm for traveling to paint in various locations, preferring to remain on his Connecticut farm, which is now a National Historic Site.

In his Impressionist influenced works, Weir sometimes breaks up his canvas into the short strokes of brilliant color associated with the style of Monet, Sisley and Pissarro, but just as often uses rough scumbling to achieve his broken color, giving his canvasses a fascinating textural quality.

Like a number of the other painters labeled American Impressionists, Weir didn’t feel the need to follow the lead of his French counterparts in throwing out the academic traditions of drawing and solidity of form; and his style is often a delightful blend of the two seemingly contrary artistic factions, which is one of the reasons I find Weir and the other American painters of his circle so appealing.