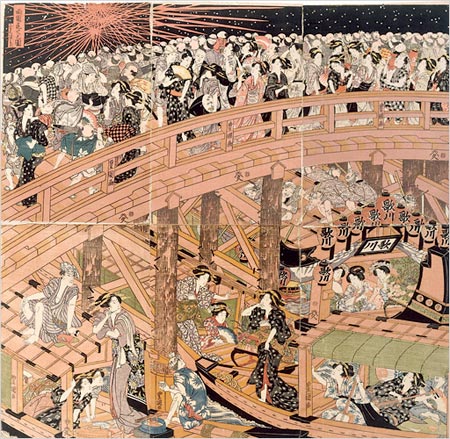 We tend to think of Japanese prints as depicting serene, contemplative scenes of mountains and gardens; and characterize them as the work of Zen-like removal from the bustle of everyday life.

On hearing that the term Ukiyo-e, the name for one of the most prominent genres of Japanese prints, refers to “pictures of the floating world”, we might assume, as I first did, that the intention is metaphysical.

In fact, the “floating world” is a term derived from a reference to a very much here-and-now (at the time) subculture that revolved around pleasure centers of major cities like Kyoto, Osaka and Edo (now Tokyo), in which food, drink, theatre, sex and other amusements offered their earthly allure.

Many of the prints that belong to that genre were of popular subjects like famous actors, sumo wrestlers, warriors, beautiful courtesans, interiors of theaters and scenes of frivolity and celebration like fireworks displays (image above: Fireworks at Ryogoku Bridge by Utagawa Toyokuni). These prints could be produced in great enough numbers that a wide audience, for whom original paintings were out of reach, could afford them. In effect, they were the visual pop culture of the time.

The Brooklyn Museum in New York has mounted a show of more than 70 prints, both from the Chazen Museum of Art, University of Wisconsin, and their own extensive collection of Japanese prints, called Utagawa: Masters of the Japanese Print, 1770-1900 that brings this character of the Ukiyo-e prints into high relief.

The Utagowa School, founded by Utagowa Toyoharu, was the major force in the Japanese print market in the 19th Century. It encompassed many of the of the finest artists working in woodblock prints at the time, including Utagawa Hiroshige (also known as Ando Hiroshige).

The Brooklyn Museum owns a complete set of Hirosage’s famous 100 Views of Edo, one of the most revered series of works in Japanese Art.

If you happen to travel to brooklyn for the exhibit, don’t miss the fact that the Brooklyn Botanic Garden has a beautiful Japanese Hill and Pond Garden that should be showing signs of first blossoms about now; in which you can walk through the kind of serene and contemplative landscape we normally associate with Japanese prints.

For an experience more in keeping with the popular early prints of the Utagawa School, you might try Times Square.

Addendum: The Brooklyn Botanical Garden is offering a Utagwa woodprinting class inspired by the museum’s exhibit. From the Garden’s description of the class: “The Brooklyn Museum’s exhibit of Utagawa woodblock prints will inspire us to make wood and/or linoleum block prints of BBG sites. Two or three sets of numbered prints will be the class goal. Previous experience with linoleum and/or wood block printing is necessary. To register, call 718-623-7220. 6 Thursdays: May 1 to June 5 | 10:30 a.m.â€“1:30 p.m. $174 member, $189 nonmember (Fee includes $25 lab fee.)”

One Reply to “Utagawa: Masters of the Japanese Print, 1770-1900 at the Brooklyn Museum”