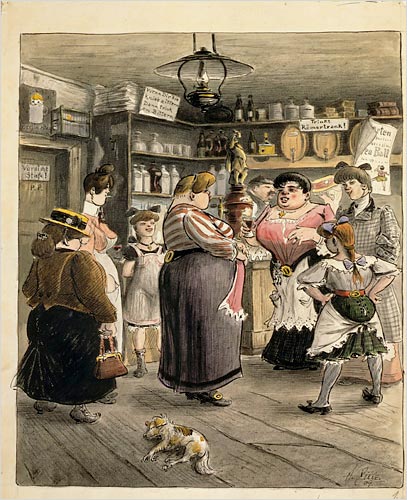 Heinrich Zille is an artist I was unfamiliar with until I came across this article in the New York Times.

Apparently, I’m not alone, in that he is not well known outside his native Germany. There, however, he is not only well known but celebrated, particularly in his adopted home of Berlin, where he came to be revered as something of a symbol of the spirit of the city at the time he was active, in the late 19th and early 20th Century.

Zille was an illustrator and photographer noted for celebrating common people at a time when their lot was a difficult one, particularly in his portrayals of life in the Berllin Mietskasernen, or tenement barracks, roughshod buildings crammed with desperate peasants who had fled a life of toil and poverty in the farmlands and fallen into deeper poverty in the industrialized city.

On moving to Berlin, Zille became familiar with some of the noted artists of the time, including Max Beckmann, Käthe Kollwitz, August Gaul and Max Liebermann.

Zille became Liebermann’s protege and created a reputation for witty but incisive social commentary in the form of cartoon-like illustrations about the life of the common and poor in turn of the century Berlin. He became known as “Pinselheinrich”, or “Heinrich the Brush”.

He frequented the bars and cellars of the seedier quarters of the city and became a familair figure there, often called “Papa Zille”, taking in that life in all of its rough character and honesty. He would later say “No one would believe all the things I’ve seen.”

Berliners are celebrating the 150th anniversary of Zille’s birth this year with events and exhibitions. There is a small museum there devoted to his work.

There are some resources on the web, including a dedicated Heinrich Zille web site, but the best images I’ve found are in the slideshow accompanying the NYT article.