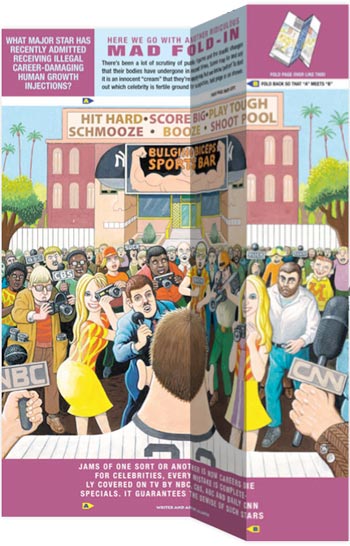 Al Jaffee is a cartoonist and comics artist who is best known as a long-time contributor to Mad magazine. Early in his career, Jaffee worked for Timely Comics and then Atlas Comics, which were early forms of the company that became Marvel Comics.

Jaffee joined Mad magazine in in 1955, shortly after editor Harvey Kurtzman transformed it from a comic book to magazine format to dodge the restrictions of the anti-comics backlash that had been stirred up against Mad’s sibling E.C. horror comics.

Jaffee is the longest running contributor to the magazine and may have been in more issues than any other single artist. He also joined Kurtzman on his other humor magazines, Trump and Humbug.

Jaffee is a writer as well as an artist and has created many series and single features for the magazine over the years, including Snappy Answers to Stupid Questions, many of which have been published as a series of collections. There have also been collections of some of Jaffee’s other work for the magazine published as Mad’s Vastly Overrated Al Jaffee and Al Jaffee Gets His Just Deserts.

Jaffee always seemed to be part cartoonist, part inventor, and many of his features have been based on weird gadgets, outrageous fake inventions and clever designs for things. Jaffee is most associated with one of his own “inventions”, the “Mad Fold-in”, which is one of the longest-runing features in the magazine, started in 1964 and continuing today. There is also a collection of those: Mad Fold This Book!: A Ridiculous Collection of Fold-Ins.

These were originally a parody of “fold-outs” in Playboy and other men’s magazines, in which an extra, originally folded over page would fold out to allow an extra large photograph to be printed across three pages (bringing to mind Martin Mull’s quip: “Playboy is like National Geographic — lots of nice pictures of beautiful places you’ll never visit.”)

Jafee’s Mad version was, of course, the opposite, a fold-in in which the image became smaller, but in the process changed its meaning by becoming a different image altogether. This requires some cleverness and careful planning, a task to which Jaffee’s inventive mind is adroitly suited. The idea was a hit, and has become, in essence, the toy prize in the Crackerjack box for each issue the magazine. Jaffee has used the idea both for fun and for sometimes biting social commentary that has ruffled more than a few feathers.

Jaffee has won major cartoonists awards from National Cartoonist Society and is one of three nominees for this year’s Ruben Awards.

Much to the delight of Jaffee fans everywhere, he’s still at it today at the age of 87. In 2006, on his 85th Birthday, Steven Colbert invited Jaffee on his show and presented him with a fold-in birthday cake, which had typically complimentary wishes written on the icing that, when the middle section of the cake was removed, became reduced to “Al, you are old.”

The New York Times has just published an article on Jaffee, along with a great interactive feature of Al Jaffee’s Fold-ins, Past and Present, that showcases a dozen or more of his clever pieces, starting from the early 1960’s, in an Flash module that lets you fold them over.

This, of course, neatly sidesteps the dilemma we had as kids of whether to fold in and crease your copy of the back cover, or try to figure out what it was without folding, or hope your friends had already folded theirs.