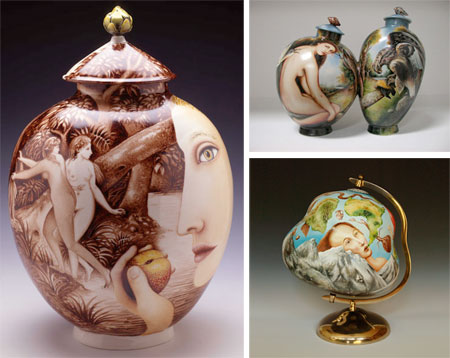 The history of the art of china painting is a long one. It is an art in which the application of paint and glazes was initially used to decorate ceramic vessels with patterns and eventually with images of varying degrees of representational detail and complexity.

Kurt Weiser is a contemporary ceramics artist and painter who creates unique pottery, both vessels and objects, that are painted with detailed representational imagery.

The paintings, inspired by the styles of old master paintings, depict allegories and scenes related to the relationship of man and nature. They are painted in a painstaking china painting technique that requires careful planning of the order and placement of colors, the application of overglazing and multiple firings.

The result is objects that are striking in their shape and physical characteristics as well as carrying the visual and emotional impact of representational imagery.

Some of his pieces are almost straightforward vessels — vases or jars that look as though they could be functional. Others are skewed away from functionality in a way that leaves no doubt that this object only exists as an art object.

Some of them seem to be the fusing of two separate vessels that inadvertently touched in some pan-dimensional way, and are now warped along with the distorted juncture of space-time in which they sit; a surreal effect that is heightened by the spacial sense within the representational paintings wrapped across their surfaces.

There are several series of globe-like objects, irregularly shaped, almost amorphous variations of spheres with paintings on their surface depicting continents, animals and people in juxtapositions that carry multi-leveled musings on the natural world. These are suspended in mountings that function like traditional globe-holders, but curved to match the unique non-speherical shapes of the ceramic object.

The Belleville Arts Museum in Belleville, Washington is currently presenting an exhibit of Weiser’s work: Eden Revisited: The Ceramic Art of Kurt Weiser that runs through April 20, 2008.

In it, you will see globes that span ephemeral worlds and vessels that are made as containers for ideas and emotions.