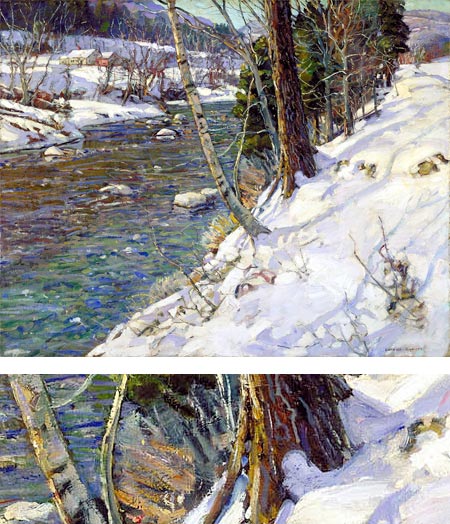 George Gardner Symons was an Amreican painter active in the late 19th and early 20th Centuries. He was born in Chicago and was one of the early artists to live and work in California in the 1890’s, after the trans-continanal railroad made the previously remote section of the U.S. more accessible (see my posts on Guy Rose, Granville Redmond and Hanson Puthuff).

Symons studied at the Art Institute of Chicago, and later extended his studies in London, Paris and Munich before returning to the U.S. and California.

He also maintained a studio in New York City and another in the Berkshires, traveling between there and Laguna Beach, where he was an active participant in the thriving art community.

He worked as an illustrator for a time and was commissioned by the Santa Fe Railroad in 1914 to create paintings of the Grand Canyon for promotional campaigns.

Symons’ exposure to Impressionism in Europe has a lasting influence on his work. He painted “en plein air” and is generally classified as an “American Impressionist”. Though he is noted in particular for his scenes of New England in the Winter, he is considered a member of the California School of American Impressionism.

Confusingly enough, you might also find him associated with the Impressionist influenced painters who worked in New Hope in Bucks County, PA; and labeled as a Pennsylvania Impressionist (see my posts on Daniel Garber, Edward Redfield and Fern Coppedge).

Though there is obvious commonality in his approach and subject matter, the definitive book on Pennsylvania Impressionism says there is no evidence for this; and all of his known winter scenes were painted in new England. (The upside of this is that Encore Editions includes him in their catalog of images and inexpensive prints.)

Wherever he painted, Symons rendered his landscapes in clear, strong compositions, with a vibrant color sense, and the kind of crisp, deliberate brushwork that makes the work of so many American Impressionist painters wonderfully appealing.