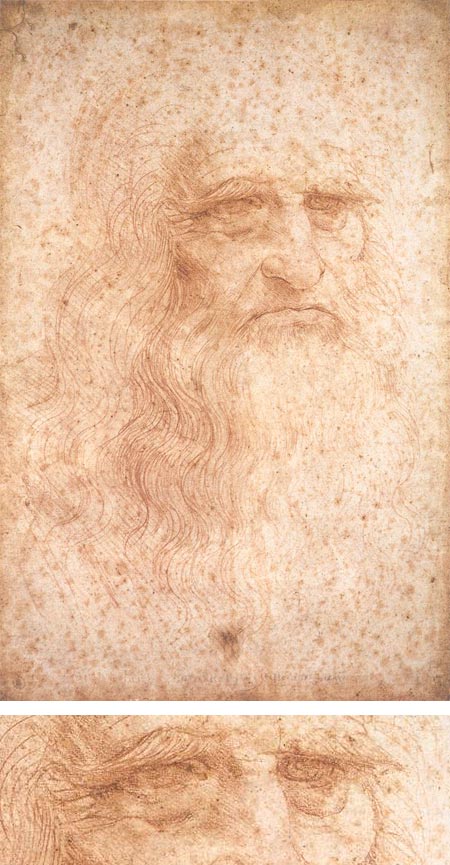 It has long been assumed that the red chalk drawing shown above is a self-portrait by Leonardo da Vinci.

It certainly looks like what we expect or want the great Renaissance artist to look like, his penetrating deep-set eyes gazing out at us from distant past, weighted with the perhaps painful wisdom of great insight into the nature of the world and the ways of man; but its status as a self portrait has been called into question in recent years by prominent art historians; leading to the inevitable question of whether we really know what Leonardo looked like.

There are even those who claim, based on the assumption that the above image is a self-portrait, that similarities between key points in the facial structure show that the enigmatic face of the Mona Lisa could have been modeled on his own.

I don’t buy that one, but I have always accepted the above image as a self portrait, mainly because I recognize in it that “look” that I’ve seen in hundreds of self-portraits. It’s a look that I associate with a particular shift in mental state associated with drawing, something to do with where and how the eyes are focusing (see my post on Drawing on the Right Side of the Brain).

It’s a little hard to tell from this reproduction, and I was hard pressed to find a better one on the web. This is a very old, and very delicate, chalk drawing that is difficult to reproduce, and to see it more clearly you need to look for it in print, as on the back cover of Taschen’s excellent volume Leonardo da Vinci: Sketches and Drawings by Frank Zollner (part of a two volume set of his paintings and drawings – technically not in print in the US, but you can sometimes find it used or even discounted). There, and in other good reproductions, you can see the way the eyes are focused right at the viewer (or a mirror) and have that particular look of an artist deep in the mindset of concentrated drawing.

Still, scholars are saying the assumption that this is Leonardo is in question.

The only portrait of Leonardo for which we have reasonably reliable attribution is Verrocchio’s David, a statue for which Leonardo is believed to have posed as a boy of 15, but it’s difficult to draw immediate comparisons between that and the image of a man who is at least in his late 60’s.

This all leads to a fascinating four-minute presentation at this year’s TED (Technology Entertainment Design) Conference by Siegfried Woldhek, in which he does an astonishing analysis of Da Vinci’s drawings, systematically narrowing them down to possible candidates for self-portraits.

Siegfried Woldhek is a well known Dutch illustrator whose speciality is faces. He’s drawn over a thousand of them, mostly political and literary portraits and caricatures, for newspapers and magazines in Europe.

Drawing on his own experience (if you’ll excuse the expression) and the assumption that Leonardo, who drew everything around him with a passion bordering on obsession, must have created some self portraits (an assumption with which I agree), Woldhek searches through Leonardo’s drawings for evidence of a record of his own visage.

The resulting talk is a wonderfully condensed argument, establishing (without question in my mind) that we do indeed know what Leonardo da Vinci looked like, and from more than one image.

[Link to TED video via BoingBoing]

11 Replies to “The Face of Leonardo?”