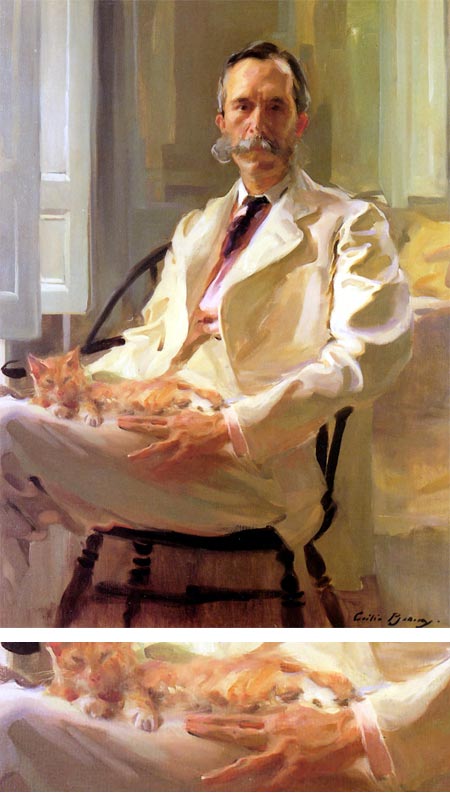 I think of portrait painting as being exceptionally demanding.

If you paint an image of a tree, and it doesn’t look accurately like a specific tree, no one will notice as long as it looks correct as a tree. Human beings, however, have an extraordinary facility (probably genetically hardwired) to recognize and understand the human form, and any deviation is easily detected.

Even more remarkable is our ability to discriminate between small variations in subtle features, and immediately recognize one face out of hundreds of thousands, even when that face is aged or young and overall proportions are radically different.

How much more difficult is it then, to not only portray an individual accurately, but to also do so with a artistic flair and mastery of painting technique on the order of that shown by Cecilia Beaux.

Beaux was one of the finest American portrait painters of the late 19th and early 20th Centuries, putting her in the company of many great artists. She fares well in the comparison, in my eyes showing second as an American painter of portraits only to John Singer Sargent (it’s probably just a personal preference that I like her work even more than that of Eakins).

By any measure, I would rank her as one of the major American artists, period.

Her beautifully subtle application of impressionistic color, masterful draftsmanship and confident freedom of brushwork easily put her on par with the best of the “American Impressionist” painters who were her contemporaries.

Like those painters, and the other master painters of the 19th Century, her star faded in the course of the systematic campaign to devalue representational art perpetrated by the post-war modernist art establishment in the late 20th Century.

The art world has been slowly coming to its senses in recent decades and artists like Beaux are once again reclaiming their rightful place in art history.

Beaux was born in Philadelphia. Her mother died shortly after her birth and her father returned to France, leaving her and her elder sister in the care of their maternal grandmother and aunts. Her family encouraged her interest in art, however, and Beaux started to earn her living as an artist at the age of 18.

At that point she was making lithographs, painting decorative paintings on china and small scale portraits, giving private art lessons and teaching at Miss Sanford’s School.

She became skilled as a scientific illustrator, and created fossil drawings for Edward Cope, a pioneering paleontologist and curator at the Academy of Natural Sciences in Philadelphia.

Beaux attended the Pennsylvania Academy of the Fine Arts, where her instructors likely included Thomas Eakins, and supplemented her studies with instruction from other Philadelphia painters, including William Sartain.

She eventually went to Europe and, as was common for American artists of her time, trained at the Académie Julian, where she studied with William-Adolphe Bouguereau, among others, as well as at the Académie Colarossi, and an art colony on the Atlantic coast in Brittany.

She returned to Philadelphia and quickly became one of the most prominent and sought-out portrait painters in the country, painting prominent members of Philadelphia society in an urbane style and on a large scale. She ennobled her sitters with dignified poses, impressive backgrounds and an overall approach that is sometimes referred to as “the grand manner”. This approach, as well as her admirable facility as a painter, invite further comparison to Sargent.

She returned to the Pennsylvania Academy of the Fine Arts as an instructor, becoming the Academy’s first female faculty member, and continued to teach there even after she moved to New York to be more available to the créme de la créme of society who were her patrons.

Her portraits included not only members of the monied class, but notable figures like Henry James and Edith Roosevelt. Eleanor Roosevelt honored her as “…the American woman who had made the greatest contribution to the culture of the world” in 1933.

The American painter William Merritt Chase called her “…not only the greatest living woman painter, but the greatest who has ever lived”.

She was the first American woman invited to display in the Hall of portraits in the Uffizi Gallery in Florence, and her work is in the collection of the Musée d’Orsay. Her paintings are also in major museums across the U.S.

A major exhibition, Cecilia Beaux, American Figure Painter, that started last fall at the High Museum of Art in Atlanta, and then travelled to the Tacoma Art Museum, is currently at the Pennsylvania Academy of the Fine Arts, here in Philadelphia, where she studied and taught, until April 13th, 2008.

I apologize for not giving you a heads-up about this show sooner, but I just got to see it myself yesterday. (Image above: Man with the Cat, portrait of Henry Sturgis Drinker)

It is a sweeping and large scale exhibition, and I came away with my opinion of the stature and ability of this superb painter not only reinforced, but heightened.