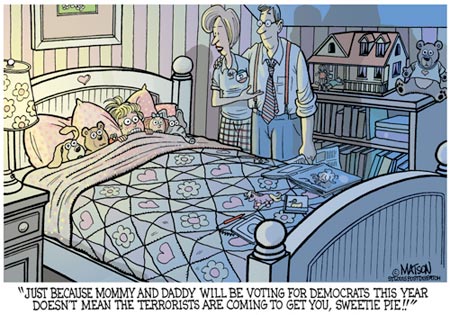 Whenever the topic of political cartoonists comes up, the question of political bias raises its smirking little head and I get comments about “How could you feature this flaming liberal terrorist sympathizer?” or “How could you showcase such a right wing fascist nut case?”.

I’ll start out by saying that RJ Matson is unabashedly liberal, unabashedly a Bush basher and also unabashedly a Clinton basher. Either he likes Obama, or simply doesn’t find him a very interesting character to skewer.

Of course, any editorial cartoonist worth their salt will go after the people currently in power, they’re the ones stirring things up, after all, and the ones we need to be reminded to keep our eye on.

While politicians who do bad and/or stupid things make life difficult for the rest of us, they’re paydirt for political cartoonists and satirists.

Regardless of whether a particular cartoonist’s political leanings match our own, we should be able to look at them for their drawing style.

Matson, particularly in the past couple of years, has been working in a line and color style that owes more to the simplicity of classic newspaper comics than to the pen and ink crosshatch style usually associated with political cartoons.

In his older cartoons, he employs a style more in keeping with that tradition, but even there he is somewhat eccentric, and you’ll find stylistic references to other cartoonists like William Stout, Ron Cobb, New Yorker cartoonists like Jack Ziegler, even the historic political cartoons of Thomas Nast.

It’s his current, open, line and color style that I particularly enjoy. Though he draws the cartoons so they will be effective either in black and white or in color (as you can see in the R.J. Matson archive on Cagle Cartoons), when reproduced in color, they have a nice feeling of direct drawing, and intentional coloring. It’s hard to put my finger on what it is about the style, but it just feels like Matson has utilized just the line work and just the color elements that he needs to nail his subject, with nothing included that doesn’t add to the effectiveness of the image; which is, of course, the essence of good cartooning.

Matson is the editorial cartoonist for the St. Louis Post-Dispatch, The New York Observer and Roll Call. In addition to his editorial cartoons, his gag cartoons and comic illustrations have appeared in many other publications, including The New Yorker, The Nation, The Daily News, The Washington Post, Rolling Stone and MAD Magazine. He has done cover art for the Capitol Steps comedy group and has illustrated several books.

Matson has been the Secretary of the National Cartoonists Society and is on the Board of Advisors of the Museum of Comic and Cartoon Art in New York.

His web site includes a selection of his illustrations, as well as an extensive archive of his cartoons. The latter can be viewed by publication, selected “Greatest Hits”, or in total. Greatest hits can give you a quick overview of some of his most popular cartoons, but if you like his work, the “All” choice makes for a nice mixture of national and local cartoons.