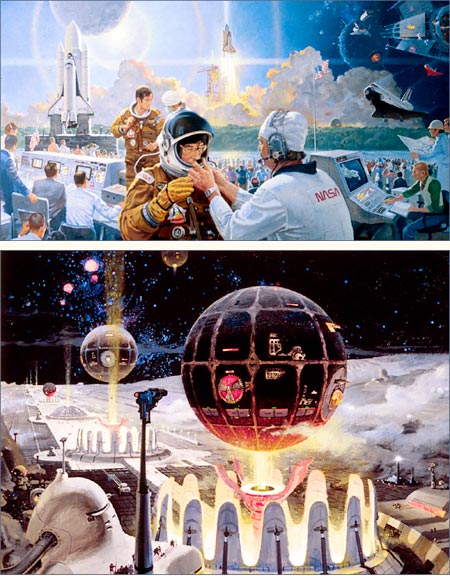 In some ways Robert McCall is an inheritor of the mantle of pioneering space artist Chesley Bonestell, continuing to document the space program and visually forecast its future, as well as the future of mankind as we step off our little blue island into the vast sea of space.

McCall first gained notice for his illustrations for a series on the future of space travel in Life magazine in the early 1960’s. McCall began documenting the US space program for NASA, chronicling many of its major achievements in dramatic paintings. His visions of spacecraft, both existing and projected, and scenes of space and the surfaces of other worlds are on display at a large scale in murals for the National Air and Space Museum in Wasington, D.C. the Pentagon, EPCOT Center and the Johnson Space Center.

His work is also in the collection of the National Gallery of Art and was on a series of stamps for the US Postal Service commemorating the space program, as well as gracing emblems worn by astronauts.

His conceptual and poster art for films includes titles like 2001: A Space Odyssey, The Black Hole and Star Trek: The Motion Picture.

You’ve probably seen McCall’s work many times without realizing it, both in famous posters and accompanying articles in popular magazines. His poster for 2001: A Space Odyssey has become something of a cultural icon.

Even if you’re passingly familiar with McCall’s work, you’re likely to be unaware of the range and variety of his paintings, from accurate representations of existing technology and real events to imaginative projections of visionary futures.

McCall’s site has nicely extensive galleries of his work in several categories. When viewing the thumbnails, rollover the “i” symbol for information about the dimensions, medium and publication of the image, and click on the text link for a larger version (thumbnails are not linked).

The site also has biographic and background information on the artist, as well as information on sales of original art and limited edition prints. There is a collection of his work, The Art of Robert McCall: A Celebration of Our Future in Space, with an introduction by Ray Bradbury, that is out of print, but may be available used. McCall’s site has a limited number of signed copies for sale.

Link: www.mccallstudios.com
Article on CNN.com
Interview on CNN.com
Artcyclopedia (links to other resources)