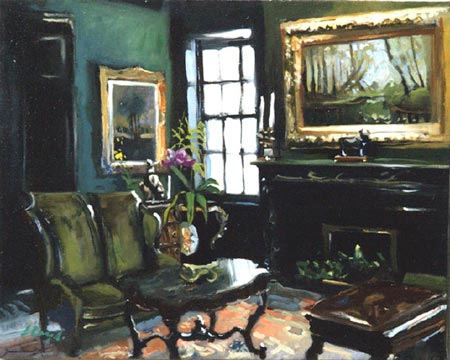 David Lloyd is self-taught as an artist. Born in Virginia and raised in Houston, he studied Drama, English Literature and Philosophy at the University of Houston.

Lloyd has developed a style that wavers between painterly realism and a graphic feeling that recalls the modernist influenced styles of mid-20th century illustrators like Al Parker.

Lloyd works in acrylic at a relatively small size (at least in those paintings for which I can find sizes), frequently 8×10″ (20x25cm).

Lloyd’s subjects range from mountainous landscapes to intimate still lifes to portraits and figurative works to illuminated night streets mirrored in rain. My favorites are his quiet interiors, their subtle darks in sharp contrast to brightly illuminated windows.

There is often a sketch-like feeling to the drawing component of his paintings, in which verticals are left casually askew and forms are briefly suggested.

At other times the works can feel more finished, as in the image above; there is always a feeling, though, that he has stopped at the moment when there was “enough” to the image, never pushing into the dangerous territory of potentially overworking the painting.

Lloyd maintains both an Artblog, where he posts recent paintings, and a Sketchblog, in which he posts his sketches which are frequently done in pen and ink on toned paper, occasionally accented with wash.

Lloyd is represented by the Jean Bragg Gallery and the Canal Street Gallery in Houston, as well as making his work directly available through his web site.