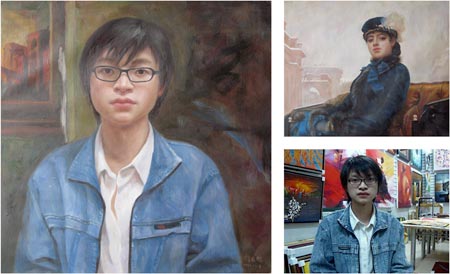 I’m not certain how the statistic was arrived at, but the figure being bandied about is that 60% of the world’s paintings come from a single village in China.

Dafen (Dafen shequ) is actually more of a suburb than a village, lying outside Shenzhen, a city of 10 million northeast of Hong Kong. In the early 1990’s a group of 20 or so artists moved to the area at the urging and under the guidance of artist/businessman Huang Jiang, and began turning out quantities of replicas of famous paintings by artists like Da Vinci, Van Gogh, Dali, Rembrandt, the French Impressionists and others.

The enterprise became wildly successful and more artists were recruited, a number now believed to be in the thousands. The paintings are sold through a number of outlets, both brick-and-mortar and online (do a Google search for Dafen paintings), while some of them are original in design (think ads for “starving artist sales” and cheap “sofa sized paintings”), most are copies of famous paintings and are clearly promoted as replicas. 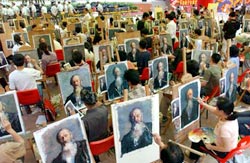 While there are replica painting enterprises with similar processes in other countries (notably Russia), nothing approaches the scale of the output from Dafen.

The area has become a gated community, with a large sculpture of a hand with paintbrush outside its gates, and indulges in its identity as an art center, even to the point of facsimile painting “matches”, in which a hundred or more painters compete in creating replicas of the same painting in a timed event (image at left – AP).

The site and journal for REGIONAL, a design and research network whose founders are currently working in Shenzhen, commissioned some of the Dafen painters (many of whom studied at art academies) to turn their painting skills from painting replicas to painting self-portraits. A few of them are posted along with the article Self-Portraiture and emerging artistic consciousness in Dafen â€˜Oil Paintingâ€™ Village, accompanied by a photo of the artist and one of their representative facsimile works.

The images at top, taken from the article, are of painter Xu ZanPeng, who specializes in Russian Baroque painters, including a detail of one of her replica paintings of Kramskoy’s Unknown Woman (see my recent post on Ivan Kramskoy).

I doubt there is any town in the world into which oil paint, brushes and canvas are trucked in, and paintings trucked out, in such quantities. According to the Chicago Tribune, Dafen shipped over $120 million in paintings last year, which is a lot when you consider that the prices are usually quite low.

I guess it’s good that there’s a large worldwide market for oil paintings, even if it’s not exactly the kind of market for which we might have hoped.

[Link to REGIONAL article via BoingBoing]

11 Replies to “Dafen, China – Where All the Paintings Come From”