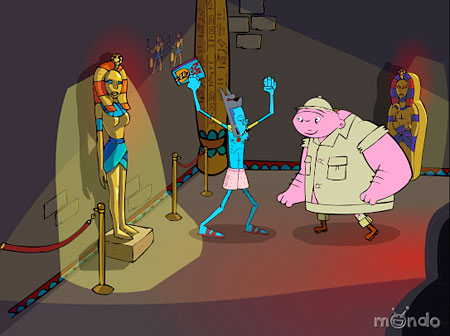 Thugs on Film is one of my favorites of the crop of independent Flash animation short series that have come and gone over the past few years.

Distributed by Mondo Mini Shows, Thugs on Film is lamentably no longer being produced. Mondo’s awkward an inelegant distribution and promotion model always confused me, and evidently, other potential viewers as well. They now seem intent on putting most of their efforts into Happy Tree Friends, a series whose appeal is lost on me.

No so with Thugs on Film, a wonderfully snarky setup in which a couple of British thieves, er, independent small businessmen, sit around in a warehouse full of loot merchandise and review movies, awarding the reviewed feature a rating at the end based on the number of pilfered recently acquired Rolexes up their sleeves. Thugs on Film is just up my alley, irreverent, funny and drawn with a style that has a nice springy feeling of rough line work and is designed with the requirements of inexpensive limited animation for Flash in mind.

The designers and animators take advantage of color and simple shapes to create mood and settings, and the limited animation is used to best advantage to compliment the writing. The characters, Stubby and Cecil, are well designed, both visually and conceptually, and play well off of each other.

For a while, you couldn’t even find these animations. Mondo’s misguided attempts to keep them monetized instead kept them out of reach, and confused even devoted fans trying to search out the episodes.

Some of them (though certainly not all) are now available again on the Thugs on Film section of the Mondo Mini Shows site, even if it’s in a less than wonderful interface. Wait for a short eSurance spot and the episode plays. You can choose more from the scrolling menu below the main screen.

The older ones ended with an interactive quiz, with a different short snippet shown in response to your answer, but these seem to be short circuited now into ads for Happy Tree Friends and eSurance.

Some of the older episodes are also better and more elaborate, they apparently got a little tired of the formula after a while.

You can also look through the other Mondo cartoons, though except for an occasional episode of Like, News, none of them has particularly grabbed my attention.

Created by Dan Todd, Thugs on Film was a group effort. I’m not sure how consistent the team was throughout its run, but here are some of the credits from a middle period episode (in which they reviewed The Mummy Returns): Directed by W Kamu Bell, Design by Rhode Montijo, Storyboards by David Donar, Backgrounds by Jenny Hansen and animation by John Cimino, Mark Giambruno and Mark West.

I give Thugs on Film five Rolexes.

2 Replies to “Thugs on Film”