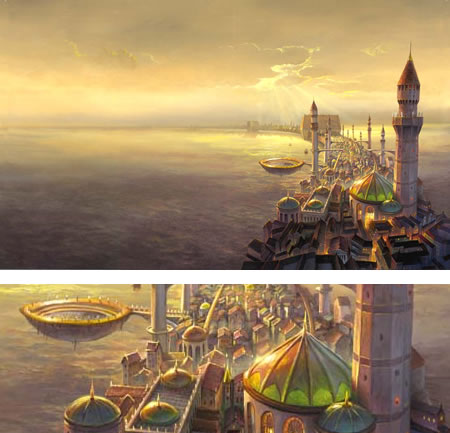 I had the pleasure Friday of attending a reading at the Barnes & Noble bookstore on Rittenhouse Square in Philadelphia by fantasy author Gregory Frost. Frost did an excellent reading, with just the right degree of theatricality, from his new book Shadowbridge. The book is based on a fascinating concept involving stories within stories, and is played out on a fantastic world with few large land masses in which life unfolds on a sprawling and complex system of enormous bridges.

The task of representing these bridges on the book’s cover fell to German illustrator Thomas Thiemeyer, who, according to Frost, did a superb job of capturing and conveying his vision of the Shadowbridge world.

You can see Thiemeyer’s oil on Masonite painting for the wrap-around Shadowbridge cover (image above, with detail, below) in more detail on his web site, along with preliminary sketches and the front of the finished cover.

Frost’s Shadowbridge is a two part story; the second book, Lord Tophet, is due out in July. Thiemeyer has also done a dramatic painting for that book’s wrap-around cover, envisioning this world-spanning bridge system from the underside, which you can see here.

When browsing through his online galleries, don’t be put off by the somewhat awkward arrangement that often sends you to pages of images you’ve seen before; some of the images you haven’t seen by that point will be worth your perseverance, with eyebrow-lifting vistas of beautifully imagined worlds lurking just under the next link.

Thiemeyer works both in oil and digitally, sometimes combining the two techniques in the same image. He has a subtle command of color, particularly in scenes at dusk in which the fading light of early evening mingles with pools of artificial illumination or fire. He displays remarkable finesse when portraying the the textures of rock, sand, cliffs and mountains; perhaps a side benefit of his joint study of art and geology in college.

His illustration clients include HarperCollins, Random House, Heyne, Arena and Wizards of the Coast; and his work has been in several of the Spectrum collections of contemporary fantastic art.

Thiemeyer is also an author in addition to being an artist, and has penned several high-selling novels, including Medusa, Reptillia and Magma.