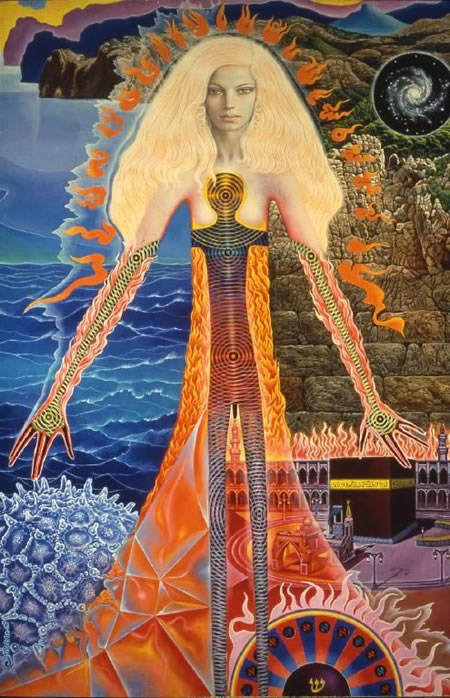 In 1938, while researching derivatives of the fungus ergot in search of pharmaceutical applications in the treatment of migraines, Swiss scientist Dr. Albert Hoffman synthesized a chemical called lysergic acid diethylamide-25, which came into common parlance, and common use, in the early and mid-1960’s as LSD. It was a few years later before Hoffman, reportedly accidentally, discovered that the chemical had remarkable psychoactive properties.

Hoffman died on Thursday, at the age of 102, and though his legacy includes a number of other useful pharmaceuticals, it is the synthesis of LSD, and it’s impact on the culture, for which he will be remembered.

There is no doubt that the explosion of frenetic creative activity in music and the visual arts that occurred in the 1960’s owes much of its impetus, directly or indirectly, to the influence of LSD and related psychotropic compounds on the artists and musicians active at the time; an influence that continues to this day and has been absorbed into the fabric of mainstream art and entertainment.

There are a number of artists who are associated with the array of visual art styles that came to be called “psychedelic art”; for some examples, see my articles on Rick Griffin, Robert Venosa, Martina Hoffmann, Alex Grey, Andrew Gonzales and Peter Max. (For a clearer perspective on the influence of consciousness altering chemicals on artistic pursuits, separate from both the overreaching hype and anti-drug hysteria that ensued, see Aldous Huxley’s The Doors of Perception.)

Though he stated that it was not his primary source of inspiration, one of the prominent artists most often associated with the visionary and spiritual aspects of that style is the German painter Mati Klarwein.

Klarwein had been established as a gallery artist for some time, but he entered the popular consciousness when several of his hallucinatory paintings graced the covers of popular progressive rock and jazz albums in the mid-60’s. His painting Annunciation, reproduced on the cover of Santana’s Abraxas LP, and his commissioned cover for Miles Davis’ Bitches Brew became cultural icons of the time.

Born Matias Klarwein, and reportedly named for German Renaissance painter Matthias Grünewald, himself something of a visionary painter, Klarwein studied with Fernand Leger and attended the Ecole des Beaux-Arts in Paris, before encountering the influential fantastic realist painter Ernst Fuchs, who would have a dramatic impact on his path as an artist.

Klarwein’s paintings also show the influence of the Surrealists, notably Salvador Dali, with whom he studied at one time, and share the ability to reinforce fantastic visions with startlingly precise realist painting technique.

His sometimes complex panoramas of bizarre imagery, reinforced with patterns of intense colors (often juxtaposing high-chroma colors with their compliments for the added intensity produced by optical effect), are rich with intricate detail, often carried to extreme levels. His circular composition Grain of Sand is particularly striking in that respect.

There are several collections of his work, some of them out of print but often available used, God Jokes: The Art of Abdul Mati Klarwein, Inscapes Real-Estate Paintings by Mati Klarwein, Milk n’ Honey, and a very nice volume that I particularly like, Mati Klarwein: Collected Works 1959-1975.

[Note: the sites linked here contain images that should be considered NSFW.]