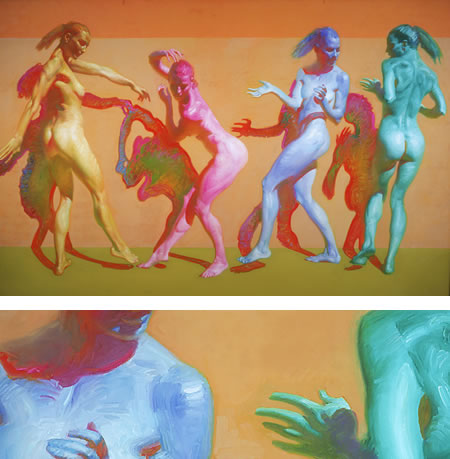 John Asaro’s web site opens with a statement about a change in artistic direction, from a 30 year career as a painter of “genre scenes” to a new commitment to exclusively painting the female figure.

The site contains little else in the way of information or background and is simply a gallery of work. The paintings themselves, which Asaro calls “figure portraits in arrangements” are striking. Single or multiple figures are indeed arranged compositionally against intense almost flat color backgrounds, with a singular eye to negative space.

The figures themselves, though sometimes colored naturalistically, are more often rendered in high-chroma colors; giving an impression of being monochromatic, but actually resonating with a rich variety of color.

Asaro paints in oil on canvas, and he lays in his bold colors with equally bold brushstrokes, wrapping them around the figures in a way that both emphasizes the forms and creates a vibrant visual texture.

When you look at the detail images that sometimes accompany the main images on the site, you can come away with the impression that the brushwork is so free that it must have been painted quickly, but I think the accuracy of the drawing indicates a more careful application of paint. I think it is confidence born of many years of painting that gives the impression of loose application.

Though his site is devoted to work in the new direction, you can still see some of Asaro’s previous work, which is in demand as limited edition serigraphs, on other sites.

Asaro is apparently represented by Lela Harty Studio/Gallery and on their site, despite a terrible navigation interface which keeps it all but hidden, you can find a long list of sold paintings linked to images. Asaro’s “genre painting” occasionally consists of straightforward landscapes, but most often is of figures in landscape, in the tradition of Sarolla, Anders Zorn and many of the painters labeled “American Impressionists”.

The Lela Harty site also lists a book, Asaro: A New Romanticism, which is out of print and unfortunately expensive used, and a new video, Asaro: A Retrospective, which is available on DVD.

Note: Some of the images in the sites linked here might be considered NSFW.