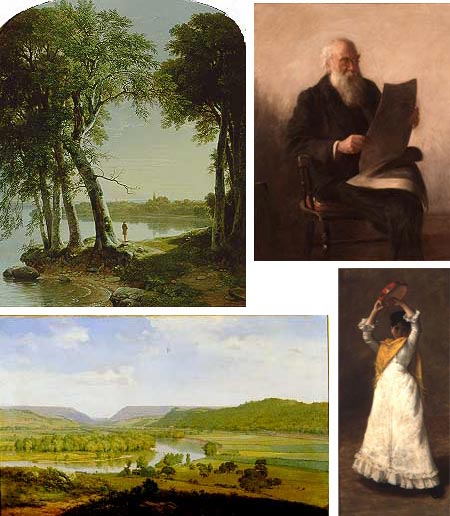 I’ve written before in the course of other posts about the pleasures, and treasures, to be found in small art museums.

By small, I mean compared to the large museums we associate with major metropolitan areas. These smaller museums are sometimes in those same cities, but more often are in smaller cities or towns.

I had the pleasure yesterday of visiting the Montclair Museum in Montclair, New Jersey, about 30 miles outside of New York (correction: 17 miles, see this post’s comments).

Most small museums, and many larger ones, have their origin as the collection of an individual. In this case museum co-founder William T. Evans started the ball rolling with a donation of 36 paintings to the Municipal Art Commission of Montclair in 1909. The museum has a short history on its web site that is a textbook case in how art museums like this are established.

I was impressed in the latter painting, not only by Durand’s skill at rendering large scale subjects, filling them with lush detail and moving your eye around the canvas as if on a guided tour, but also by the contrast between his detailed passages, areas of suggested detail and other areas in which he confidently executed large shapes with broad, painterly brushstrokes. After having recently seen large scale landscapes by Corot and other painters of the Barbizon School, I couldn’t help by draw comparisons.

The real star of the collection, though, is a dedicated gallery containing nine works by Montclair’s native son, George Inness, who not only settled in Montclair, but painted many of his well known works there.

The paintings in the collection cover a good range of the artist’s career and life and are arranged around the gallery chronologically. You can follow his progress from his early 20’s (at which point he looked more like a junior member of the Hudson River School than his mature self), through a developing period in which he was obviously highly skilled and accomplished at handling large scale, complex landscapes in a straightforward and painterly manner, deftly handling intricate detail in the process (Delaware Water Gap, image above, bottom left), to the more recognizable paintings of his mid and later career, in which he exhibited the stylized rendering he is noted for (the only style of Inness painting I have encountered in other museums.) The paintings continue up to just a couple of years before Inness’ death, in which his images dissolve into a poetic haze of tonalist color, and what appear to be indistinct smears of color at close range magically transform into representational images at a distance.

This is a remarkable little gallery of his work, and if you appreciate Inness, is worth a visit to the museum on its own. Combined with the museum’s other treasures, it’s a noteworthy destination if you’re in the New York area.

Another sharp contrast between museums like this and the huge scale museums in major cities is the comfortable atmosphere and warm personal approach. We met a few members of the museum staff and one of the new volunteers, and found them charming, friendly and obviously proud of the treasures their museum had to offer.

8 Replies to “The Montclair Art Museum”