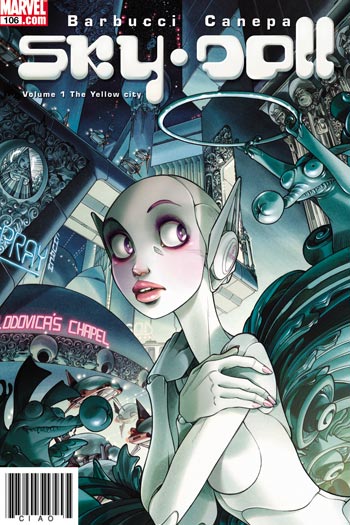 I’ve long been a fan and advocate of European comics, a field in which I think some of the most exciting work in the comics medium is being done.

Japanese comics (“manga”) have made significant inroads into the U.S. market, becoming something of an obsession in some circles, but European comics have been slow to find acceptance, partly because it’s still difficult to find European comics albums here, and even harder to find translated versions of comics produced in French or Italian.

There have been attempts over the years to bring over some comics from France, Belgium, Italy and the UK (including Marvel’s very nice reprints of material from Jean “Moebius” Giraud in the 1980’s), but they never really captured the audience they might have.

To Marvel’s credit, they are trying again to import and translate some comics from France, this time in partnership with French publisher Soleil. They’ve started with one of my favorites, Sky Doll by Alessandro Barbucci and Barbara Canepa.

If you don’t have access to the French originals, and missed the quick reprint in Heavy Metal, here’s a chance to pick up on the series anew. (See my previous posts on Alessandro Barbucci and Barbara Canepa and Sky Doll in Heavy Metal, in which I post additional images from the series and describe it in more detail.)

I give Marvel extra credit here, not only for bringing French comics to the American audience, but also for starting out with an adult title, in both senses of the word. Sky Doll, though not as overtly sexual as some comics, is labeled with a Mature Content advisory and contains nudity and sexual situations.

Don’t be put off by what might look at first glance like a cheesecake sci-fi story; the series is actually mature in the real sense, and deals with those very subjects, the objectification of women as sexual objects, personal freedom, societal control, and individual resistance to unacceptable social norms. On the other hand, don’t let me give you the impression that the story is high-handed and preachy, it actually manages to deal with those subjects in the course of a fun adventure story, amid wildly imaginative settings and striking design work, rich with detail and sparkling with ebullient color.

The first issue of Marvel’s Sky Doll (a three issue limited series) reached the comic book specialty stores last week, and may still be on the shelves in those stores adventurous enough to have ordered it. If not, you may be able to order it directly form Marvel or from an online specialty store like Mile High Comics.

I also give Marvel credit for doing a good job with the reproduction, capturing the intricate details of Barbucci’s drawings and often subtle tones of Canepa’s colors despite the reduction in size from the original French albums to American comic book format.

There is an article on Newsarama about the series, that includes some pages from the story as well as some of the pages in this issue that preview upcoming Marvel/Soleil projects, Universal War One, Samurai and Scourge of the Gods.

The official Sky Doll site, that was up for several years, has gone offline. There is an unofficial site (FR) that contains a lot of art work if you click around a bit.

Barbara Canepa, writer and color artist for Sky Doll, keeps an active blog (in French, Italian and often English), in which she talks about Sky Doll and other projects. Likewise, Alessandro Barbucci now has a blog as well.

Note: Some of the sites linked here contain material that is NSFW and not suitable for children.