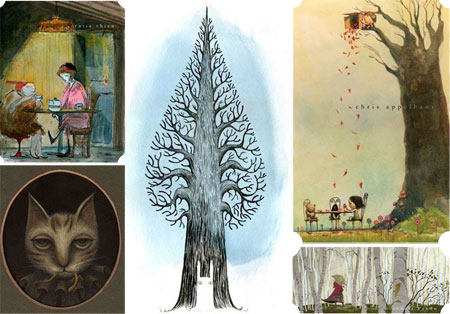 Gallery Nucleus is a gallery in Alhambra, California that places a particular emphasis on illustration, commercial art and graphic narrative (e.g. comics). I’ve mentioned them before in the course of posts about artists who were exhibiting there.

The gallery has a new exhibit opening on June 14th called Into the Woods, with a group of artists, two of whom I have written about previously, whose oeuvre includes visual storytelling of one kind or another.

Catia Chien (image above, top left) is a free-lance illustrator who has illustrated a number of children’s books and contributed to the Flight comics anthologies.

Chris Appelhans (above,top right) is a concept artist for the film industry, whose credits include Monster House and a new urban/sci-fi version of Alice’s Adventures in Wonderland called Underworld. He has also contributed to the Flight anthologies and has a series of short webcomics called Frank and Frank that have recently been published in a wonderfully strange format book. (See my previous post on Chris Appelhans.)

Kazu Kibuishi (image above, center) is the editor of the Flight comics anthologies and creator of one of my favorite webcomics, copper, as well as the new graphic novel Amulet, which has recently been optioned as a feature film by Warner Brothers. (See my previous posts on Kazu Kibuishi, Amulet and Copper.)

Robert Kondo (above, lower right) is a concept artist with Pixar Animation, and has worked on films like Ratatouille. He is a contributor to the afterworks blog and part of E-Ville Press, a cooperative comics publishing enterprise with other Pixar artists.

Yoko Tanaka is an illustrator who has done several children’s books as well as editorial illustrations for clients like the Los Angeles Times. She is also a contributor to Flight.

Into the Woods runs at Gallery Nucleus from June 14 to June 30, 2008. Chien, Appelhans, Kibuishi and Kondo will be at the opening reception on June 14.

3 Replies to “Into the Woods”