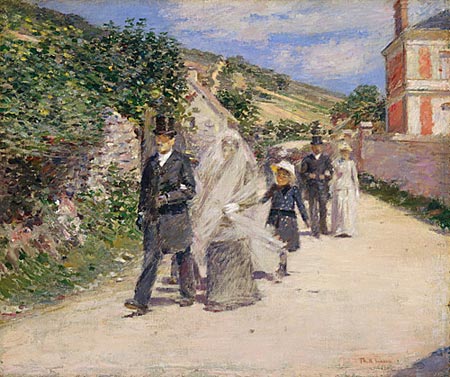 Contrary to to the dreary picture that Hollywood and popular culture sometimes like to paint of tortured, misunderstood loners living lives of desperation “for the sake of their art”, artists are usually quite social, and often like to congregate with other artists, particularly those who share their viewpoints on artistic direction.

This seems to have been particularly true about artists who paint en plein air (i.e. outdoors), whose commonality often calls them to live in the same communities, forming artist “colonies”. These were usually in rural areas that allowed the artists to paint the countryside and still have access to a major city to sell their work. You can see most of them developing as the result of one artist discovering a particularly good spot and spreading the word (“You must come and look! The light is wonderful and the tavern owner extends credit!”)

This practice of like minded artists leaving the city for village life was evident in Barbizon, not far from Paris, where the progenitors of French Impressionism gathered to paint in the Forest of Fontainbleau. One of them, Caude Monet, would later in his life settle in a small village on the other side of Paris called Giverny, along the banks of the Seine. The force of his personality and his remarkable skills as a painter would eventually form the nucleus of a colony there

The colony at Giverny was notable also for its transient residents, artists like John Singer Sargent who would come to see the great painter and his milieu. American artists in particular seemed attracted to Giverny, as the passion for painting in the Impressionist style spread through the East Coast art centers of Boston, New York and Philadelphia.

These artists would return impressed not only with the painting styles of their French counterparts, but with the idyllic situation of art colony village life outside the cities, and would soon form their own versions.

This happened across Europe; and in the U.S., Artists from Philadelphia and the Pennsylvania Academy of the Fine Arts bought farms in New Hope, on the edge of the Delaware River; those from Boston and New York found ideal settings in places like Shinnecock, New York and in Cos Cob and Old Lyme Connecticut. Eventually, a number of artists would travel west to the newly accessible territory of California, starting the California school of plein air painting in places like Carmel and Laguna Beach.

Old Lyme, Connecticut would retain strong ties to Giverny, with many artists, including Willard Metcalf, staying for long periods in both places. Old Lyme sometimes gets tagged as the “American Giverny” and the Florence Griswold boardinghouse there, where many of the artists congregated, is now a museum.

When I visited Giverny in 2002, both to see they beautiful countryside along the Seine, and the house and gardens of Monet, which have been restored to a beautiful approximation of their original state based on photographs and his own paintings, I was surprised to find a small museum devoted to American Art in the heart of French Impressioninst territory, the Musée d’art Américain (the link is to the English version of the site, French and other languages are accessible at the lower right of the page).

That museum, which is administered by the Terra Fondation for American Art, currently has an exhibition of over 50 of the works from its collection on exhibit at the Florence Griswold Museum in Old Lyme, Connecticut.

Unfortunately, the Florence Griswold Museum doesn’t have much in the way of images on their site (and the search feature for their own collection seems to be having problems), but the Terra Foundation has a nicely searchable collection online and features zoomable images. The Terra Collection includes a number of paintings on extended loan to the Art Institute of Chicago as well as other exhibitions.