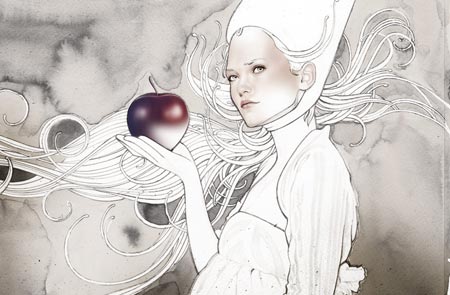 Irene Maria Jacobs is an illustrator from the Netherands who works in a variety of styles and mediums.

She works in traditional media like paint and ink, as well as digital applications like Illustrator, Photoshop and Flash, frequently combining traditional and digital media in various stages of the same illustration.

Her images sometimes take the form of monochromatic drawings in which he employs calligraphic lines surrounding more softly rendered passages, To these she often adds areas of color, or even full color rendering, giving them a fascinating multi-layered feeling.

Some of her other work can be starkly graphic, with flat areas of color arranged in complex patterns, highly rendered in a more traditional approach or stylized in various ways, including faux-woodcut.

Jacobs studied fashion illustration at Art-School St Joost in Breda. She worked in Germany for a time and is currently based in Rotterdam. Her clients include WIRED, Vibe, Marie Claire UK, Toyota, Coca-Cola and ESPN.