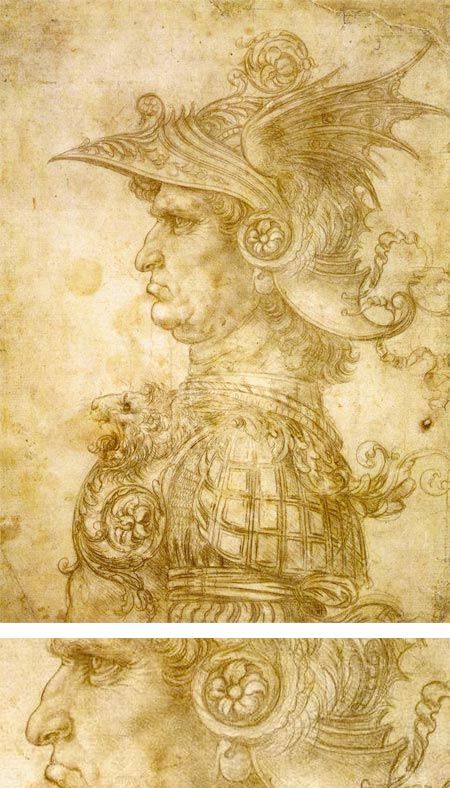 Leonardo da Vinci is one of those artists, like Rembrandt, Monet or Van Gogh, who is obscured from us by the brilliance of his fame.

It is almost impossible to look at Leonardo without the attendant baggage of his reputation as the ultimate embodiment of the Renaissance, one of the most brilliant minds in history, and the creator of iconic images; including what is arguably the most famous painting in the World, the Mona Lisa (which I have attempted to show you with fresh eyes in my post La Gioconda (The Mona Lisa), flipped for your viewing pleasure).

Leonardo, despite his reputation as an inventor, proto-scientist, anatomist, and philosopher, was primarily an artist. To look at him as an artist, as freshly as we can, perhaps we should step back to that most basic of an artist’s skills, drawing.

Even here, Leonardo’s reputation confounds us; even his drawings are famous, from the iconic Virtruvian Man, to his drawings for flying machines, weapons of war or fantastically advanced notions like submarines and helicopters. His notebooks are the most renowned collections of sketches, drawings and notes in the world. Some of his drawings from them are among the most famous in the world and have been reproduced widely, even animated.

To most artists, drawings are an exploration of the visual world and their response to it, and preparatory studies for finished works. To Leonardo they were that and more; explorations of scientific inquiry, logistics, inventiveness, anatomical study, investigations of motion and natural phenomena, and an essential tool in his relentless quest to know and understand the world around him.

So we step back again, and try to look at his drawings simply as those of an artist, to see if we can get to know him on that level; drawing what he saw with the materials at hand, largely pen and ink and silverpoint, and less frequently, chalks.

Here, in the details of his firm line work, delicate shading and expressive textures, perhaps we can meet Leonardo the artist; observing, studying and interpreting the world before his eyes with uncanny intensity and consummate skill.

Here we see his mastery of tone, his robust draftsmanship, but ultimately his struggle as an artist, like that of most serious artists, to make his skill the measure of the fantastic wonders of the world he wanted to portray.

There is a site devoted the drawings of Leonardo da Vinci with about fifty of his drawings. A better selection, though not as easy to navigate, can be found on the Web Gallery of Art (if an image doesn’t come up in the pop-up when you click for the detail image, try reloading the pop-up window).

The Metropolitan Museum of Art has a selection of Leonardo’s drawings as part of a previous exhibit. I’ve listed some other online resources below.

Also, see my previous post The Face of Leonardo?, in which I talk about how Siegfried Woldhek analyzed Leonardo’s catalog of drawings to find those that most likely qualify as self-portraits.

There are a number of books devoted to Leonardo’s drawings. The inexpensive Dover edition, Leonardo Drawings, is viewable online through Google Book Search.

The second volume of the two volume set, Leonardo da Vinci, Vol I: The Complete Paintings; Vol II: Sketches and Drawings by Frank Zollner is beautiful, contains many of his well known and lesser known drawings, nicely reproduced and remarkably inexpensive. Though, not listed in print on Amazon, you can find it online, sometimes even discounted new, or even cheaper used.

Leonardo’s Notebooks, edited and arranged by Anna Suh, is more an appreciation than a catalog, and features many of his translated writings along with the sheets to which they relate.

There are numerous other books on Leonardo’s drawings and his notebooks. Many of them quite inexpensive; so don’t be deterred by the fact that Bill Gates at one point paid over 30 million dollars for one his original notebooks, the Leicester Codex, making it the most expensive book ever purchased.