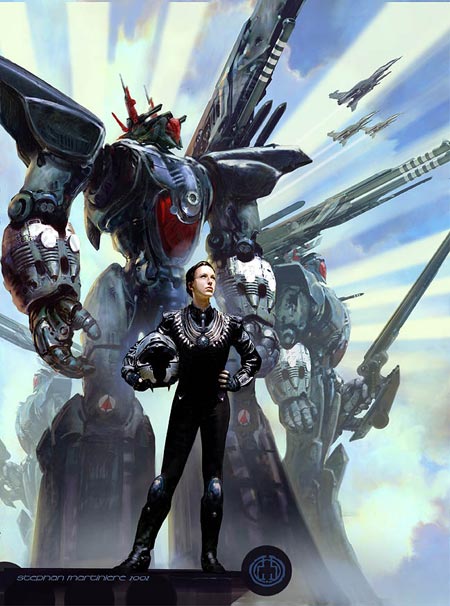 Since I wrote about Stephan Martiniere a couple of years ago, he has updated his site, and his career, with numerous additions.

Martiniere is a concept artist, art director and science fiction artist with a fertile imagine, superb skills as an artist and long, impressive resumé. In addition to his many stunning book covers and beautiful concept work for films like The Fifth Element, Star Wars II and III, I Robot and Star Trek XI; he has moved headlong into the gaming industry, “shapeshifting” his career, as his current bio puts it.

Martiniere has worked for three years as visual art director at Cyan, on their visually lavish games like Uru: Ages Beyond Myst, Uru: The Path of the Shell and Myst 5. He has now assumed the role of Creative Visual Art Director for Midway Games.

His expanded web site is a cornucopia of strikingly imaginative works in all of his areas of endeavor, including work for animated cartoons and theme park environments. Martiniere has a fresh crisp drawing style in his sketches and roughs, and a remarkable talent for projecting scale, atmospheric distance and detail in his more finished works. You can see where he has been influenced by greats in the field like John Berkey and Syd Mead.

If you are fond of concept art or science fiction illustration, be aware that his site can be a major time-sink. It’s easy to get happily lost in Martiniere’s dazzling visions of other worlds.